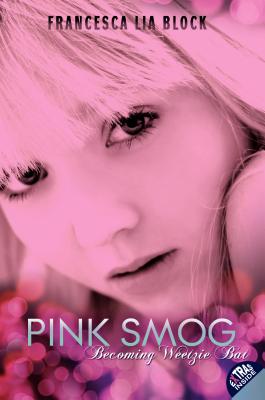 By Francesca Lia Block
$9.99
Possibly out of print. Email or call to check availability and price.

This is book number 6 in the Weetzie Bat series.

Pink Smog, the long-awaited prequel to Francesca Lia Block's groundbreaking novel Weetzie Bat, was praised as "an intoxicating mix of mystery, fantasy, and romance" by ALA Booklist in a starred review. Weetzie Bat is one of the seminal young adult novels of the '90s and continues to be an iconic treasure for teens everywhere. Now Pink Smog reintroduces a whole new generation to the eponymous Weetzie Bat—before she was Weetzie. Against the backdrop of a Los Angeles teeming with magical realism, Louise Bat struggles to find a way to deal with life after her father's unceremonious departure.

Extras in this paperback edition include "The Girl in the Pink Pinto," an essay about the inspiration for Weetzie Bat, the official Pink Smog playlist, an excerpt from Francesca Lia Block's next novel, and more!

Francesca Lia Block, winner of the prestigious Margaret A. Edwards Award, is the author of many acclaimed and bestselling books, including Weetzie Bat; the book collections Dangerous Angels: The Weetzie Bat Books and Roses and Bones: Myths, Tales, and Secrets; the illustrated novella House of Dolls; the vampire romance novel Pretty Dead; and the gothic werewolf novel The Frenzy. Her work is published around the world.

“An intoxicating mix of mystery, fantasy, and romance told in her signature poetic style and peopled by guardian angels, witches, a goddess, and a demon.” — Booklist (starred review)

“Newcomers and longtime fans alike will find much to savor in this nuanced meditation on what is lost, and what is gained, in the process of becoming an artist.” — Publishers Weekly (starred review)

“This canny introduction to Weetzie is the perfect prep.” — Bulletin of the Center for Children’s Books

“Teens... will relate to the heroine’s universal feelings of being on the fringe. Louise’s uplifting example proves that only from the outside can one forge her own true path.” — Shelf Awareness

“One of the most original books of the last ten years.” — Los Angeles Times Book Review