Get Shorty: A Novel (Paperback) 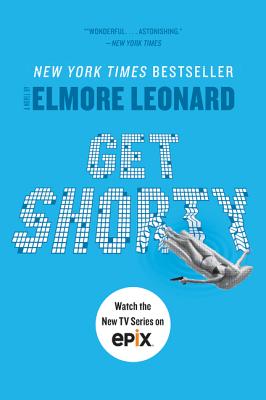 Drawing from some of his own real-life experiences in Hollywood, Leonard weaves together the story of a gangster entering the film industry by force with a rare kind of flare and wit. There’s a reason I had to close with this book, out of Elmore Leonard’s many beloved works. Thematically, it ties them all together: Crime meets Movies. See, if any of these options sound interesting, I’d absolutely recommend watching their big screen adaptations to compare and contrast with the original text.

“A Hollywood hit….Taut, inimitable prose and characters who could have only sprung from the mind of Elmore Leonard.”
—Detroit News

The Chicago Tribune has dubbed Elmore Leonard, “the coolest, hottest writer in America.” In the same league as the legendary great ones—John D. MacDonald, Dashiell Hammett, James M. Cain—the “King Daddy of crime writers” (Seattle Times) demonstrates his remarkable mastery with Get Shorty, one of the most adored of his forty-plus novels. The basis of the hit movie starring John Travolta and Danny DeVito, Get Shorty chronicles the over-the-top, sometimes violent Hollywood misadventures of a Florida mob loan shark who chases a deadbeat client all the way to Tinseltown and decides to stick around and make movies. Get Shorty’s shylock protagonist, Chili Palmer, is a truly inspired creation—as memorable as another unforgettable Leonard hero, U.S. Marshal Raylan Givens of the hit TV series Justified—and readers will relish his moves and countermoves in this electrifying, funny, bullet train-paced winner from “the greatest crime writer of our time, perhaps ever!” (New York Times Book Review)

Elmore Leonard wrote more than forty books during his long career, including the bestsellers Raylan, Tishomingo Blues, Be Cool, Get Shorty, and Rum Punch, as well as the acclaimed collection When the Women Come Out to Dance, which was a New York Times Notable Book. Many of his books have been made into movies, including Get Shorty and Out of Sight. The short story "Fire in the Hole," and three books, including Raylan, were the basis for the FX hit show Justified. Leonard received the Lifetime Achievement Award from PEN USA and the Grand Master Award from the Mystery Writers of America. He died in 2013.

“The greatest crime writer of our time, perhaps ever!” — The New York Times Book Review

“An absolute master.” — The Detroit News