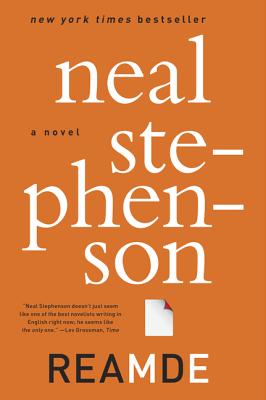 “Neal Stephenson has once again proven his breathtaking skill and mastery with a diverse range of characters and subjects. He brings together online gaming, the Russian mafia, hackers, terrorists, fantasy authors, and one resourceful former smuggler in a razor-sharp thriller. Reamde is a book for anyone who enjoys an intelligent and plausible adventure. If we truly live in a global society, then it's Neal Stephenson who not only knows how to draw the map of this new world, but can take us anywhere on that map with speed, grace, and agility.”
— Karen Tallant, The Booksellers at Laurelwood, Memphis, TN

“Stephenson has a once-in-a-generation gift: he makes complex ideas clear, and he makes them funny, heartbreaking, and thrilling.”
—Time

The #1 New York Times bestselling author of Anathem, Neal Stephenson is continually rocking the literary world with his brazen and brilliant fictional creations—whether he’s reimagining the past (The Baroque Cycle), inventing the future (Snow Crash), or both (Cryptonomicon). With Reamde, this visionary author whose mind-stretching fiction has been enthusiastically compared to the work of Thomas Pynchon, Don DeLillo, Kurt Vonnegut, and David Foster Wallace—not to mention William Gibson and Michael Crichton—once again blazes new ground with a high-stakes thriller that will enthrall his loyal audience, science and science fiction, and espionage fiction fans equally. The breathtaking tale of a wealthy tech entrepreneur caught in the very real crossfire of his own online fantasy war game, Reamde is a new high—and a new world—for the remarkable Neal Stephenson.

Neal Stephenson is the bestselling author of the novels Reamde, Anathem, The System of the World, The Confusion, Quicksilver, Cryptonomicon, The Diamond Age, Snow Crash, and Zodiac, and the groundbreaking nonfiction work In the Beginning . . . Was the Command Line. He lives in Seattle, Washington.

“Noir futurist Stephenson returns to cyberia with this fast-moving though sprawling techno-thriller...Who’ll prevail? We don’t know till the very end, thanks to Stephenson’s knife-sharp skills as a storyteller. An intriguing yarn—most geeky, and full of statisfying mayhem.” — Kirkus Reviews (starred review) on REAMDE

“Stephenson...delivers a sprawling thriller that shows him in complete control of his story.” — Publishers Weekly on REAMDE

“In less masterful hands, this pile-up of implausible coincidences, madcap romance, technological mayhem and nail-biting suspense might have been a train wreck, but Stephenson pulls it off. REAMDE has one of the most satisfyingly over-the-top endings of anything I’ve read in years. ” — Washington Post Book World

“Nobody else writes like Stephenson” — Press Association (England) on REAMDE

“Neal Stephenson has guts, a killer story, and—for the first time since Cryptonomicon—a thriller I can thoroughly recommend to any reader....With REAMDE we have a very smart page-turner—a global chess game expertly played.” — Mental_Floss on REAMDE

“Sometimes when you’re reading Neal Stephenson, he doesn’t just seem like one of the best novelists writing in English right now; he seems like the only one.” — Lev Grossman, Time magazine

“There’s an intellectual pill buried deep in Mr. Stephenson’s narrative candy, one powerful enough that he deserves to be classified as a major national and international resource.” — Wall Street Journal on REAMDE

“[Stephenson] makes reading so much fun it feels like a deadly sin.” — International Herald Tribune on REAMDE

“Reamde is an entertainment, an enormous, giddily complex one. There’s no telling what Stephenson might be planning for his next novel, but now’s the time to dive into a first-rate intellectual thriller without fear of being overwhelmed by its virtuosity.” — San Francisco Chronicle on REAMDE

“Even at a thousand pages, Reamde is sprightly enough to jump between 9 or 10 plot threads without getting tangled up in itself.…[A]n addicitve reading experience. You don’t so much read the book as tear whole hundred-page chunk out of it with your eyes.” — Stranger magazine on REAMDE

“It’s hard to sum up a 1,000 page tome in a short review, so if you don’t feel like reading this rather long one, I’ll boil it down to three words: I loved it.” — Tor.com on REAMDE

“After a decade of novels set in 18th century Europe and in alternate universes, Neal Stephenson triumphantly returns as a bestselling author to contemporary America.” — www.fantasyliterature.com

“A story that, despite its gargantuan heft, speeds along like a bullet train....The depth of the story, the attention to detail, the interlocking narratives and fine characterizations mark REAMDE as an immersive literary experience.” — Pittsburgh Tribune on REAMDE

“REAMDE combines meticulous observation of the stranger socioeconomic effects wrought by technology with rousing fusillades of adventure.” — The Guardian on REAMDE

“[REAMDE] is, without a doubt, one of the smartest, fastest-moving, and most consistently enjoyable novels of the year, a book with the rare distinction of being one this reviewer wishes he had written.” — Irish Examiner on REAMDE