High-Risers: Cabrini-Green and the Fate of American Public Housing (Hardcover) 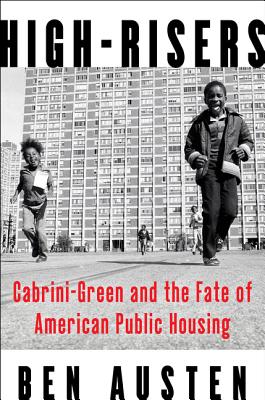 By Ben Austen
Email or call for price.
Special Order - Subject to Availability

Joining the ranks of Evicted, The Warmth of Other Suns, and classic works of literary non-fiction by Alex Kotlowitz and J. Anthony Lukas, High-Risers braids personal narratives, city politics, and national history to tell the timely and epic story of Chicago’s Cabrini-Green, America’s most iconic public housing project.

Built in the 1940s atop an infamous Italian slum, Cabrini-Green grew to twenty-three towers and a population of 20,000—all of it packed onto just seventy acres a few blocks from Chicago’s ritzy Gold Coast. Cabrini-Green became synonymous with crime, squalor, and the failure of government. For the many who lived there, it was also a much-needed resource—it was home. By 2011, every high-rise had been razed, the island of black poverty engulfed by the white affluence around it, the families dispersed.

In this novelistic and eye-opening narrative, Ben Austen tells the story of America’s public housing experiment and the changing fortunes of American cities. It is an account told movingly through the lives of residents who struggled to make a home for their families as powerful forces converged to accelerate the housing complex’s demise. Beautifully written, rich in detail, and full of moving portraits, High-Risers is a sweeping exploration of race, class, popular culture, and politics in modern America that brilliantly considers what went wrong in our nation’s effort to provide affordable housing to the poor—and what we can learn from those mistakes.

Ben Austen has written for many publications, including Harper’s Magazine, the New York Times Magazine, GQ, and New York magazine. He lives in Chicago.

“Ben Austen’s High-Risers is not merely the definitive history of the life and death of America’s most iconic housing project, but a clear-eyed assessment of what happened to public housing as a national ideal and why it happened.”
— David Simon, creator of The Wire

“Austen writes with a lyrical, poetic affection for the four main characters. Here we see there are as many Cabrini-Green origin stories as there were people living in Cabrini-Green. To merely stereotype is to willfully ignore each resident’s humanity. Austen deftly tells the stories of Wilson, Fleming, Cannon and another woman, Annie Ricks, without distance, bringing readers intimately into their lives. It is compelling writing, sure to separate Austen’s work from other, more anthropological examinations of Cabrini-Green.”
— Chicago Tribune

“Ben Austen has emerged over the last five years as one of the most serious and thoughtful new American reporters. He writes with a deceptively smooth and borderline conversational style that keeps pages turning, but he has something rarer, too: the patience to keep with a subject until it yields up unfamiliar questions. This book was years in the making and in some way Austen’s whole life in the making. In it a neighborhood becomes a character, a protagonist, but the character has inside it real human beings. Austen convinced me that my understanding of what goes on inside ‘the projects’ had been about as deep as a cop show. We need more books like this from him.”
— John Jeremiah Sullivan, author of Pulphead

“Provides many powerful insights…A weighty and robust history of a people disappeared from their own community.”
— Kirkus

“The passages about Cabrini-Green residents, interspersed among chapters about the history of the projects, take the reader into the drama of life in African-American communities…Austen combines archival work with empirical research. The hundreds of hours he spent interviewing the residents of Cabrini-Green often give his prose the depth of a novel.”
— New York Review of Books