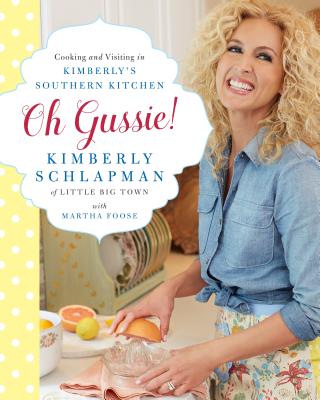 A down-home Southern cookbook by one of the founding members of the platinum-selling country music band Little Big Town and star of the popular cable show Kimberly’s Simply Southern.

Fans have fallen for Kimberly’s easy confidence in the kitchen and effortless way she entertains. They love her cooking the same way they’ve swooned over her high harmonies singing with country music powerhouse Little Big Town. In Oh Gussie!, Kimberly shares soul-pleasing recipes and soul-stirring stories from her roots in the Appalachian foothills of north Georgia, her travels on tour with the band, and from the life she loves back home in country music’s capital.

Kimberly’s cooking style embodies modern, wholesome, Southern home-cooking—fresh, accessible, nutritious, quick, and fun. With Oh Gussie!, fans can whip up a batch of Georgia Peach Salsa for a tailgate party; bring a pot of Kimberly’s Chicken and Dumplings to the next neighborhood potluck; serve some Baked Onion Rings with Hot Ranch Dip for the big game; sweeten up a weekend brunch with Sticky Cinnamon Rolls; and finish off a satisfying meal with bowls of Big Batch Banana Pudding.

Filled with gorgeous color photos that capture the flavor and fun of her delicious food, Oh Gussie! honors Kimberly’s beloved Georgia mountain-home cooking and serves up helpings of her favorite foods from Nashville as well.

Kimberly Schlapman is one of the founding members of the Grammy-winning country music band Little Big Town, which has sold millions of albums worldwide. She is also the host of the popular cooking show Kimberly’s Simply Southern on the Scripps Network's Great American Country Television. She lives in Nashville with her husband, Stephen Schlapman, and their seven-year-old daughter, Daisy Pearl.

Martha Hall Foose is the author of Screen Doors and Sweet Tea, which won the James Beard Award for American Cooking and the Southern Independent Booksellers Award, and A Southerly Course: Recipes and Stories from Close to Home. She makes her home on Pluto Plantation in the Mississippi Delta with her husband and son.