hitRECord on TV! Season One (Hardcover) 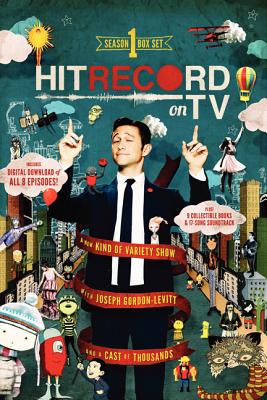 By Joseph Gordon-Levitt
$29.99
Possibly out of print. Email or call to check availability and price.

From hitRECord, a unique global online production company led by actor-director Joseph Gordon-Levitt, an official 9-book boxed set companion to the first season of their cable variety show—the only way to obtain all of the groundbreaking series' episodes together.

The premier of the half hour variety show HITRECORD ON TV in January 2014 was hailed as "a breath of fresh air" (USA Today) and "unlike anything else on TV" (Slate). Hosted and directed by Joseph Gordon-Levitt, each of the eight episodes combine original short films, skits, songs, animation, live performances, and stories—all contributed from thousands of artists from around the world through hitRECord.org, an online production company founded by Gordon-Levitt. Organized around a single theme—from “space” to “fantasy” to “money”—each episode highlights new and emerging talent and welcomes notable friends, including Scarlett Johansson, Elle Fanning, John Waters, Sean Lennon, and Tony Danza, among others.

On the cultural cutting edge, HITRECORD ON TV is a must for fans of the show and for the curious minded interested in the power of crowdsourcing and in the creative intersection where media, art, and technology meet.

Praise for the hitRECord collective: “hitRECord has accomplished something remarkable and important for writers and artists of the internet age . . . showing how we might be able to harness at least some of the Internet’s immense reach and power, and at last put them to good use.”
— John Davidson, The Millions

“At a time when the publishing industry seems mired in a disaster film, it’s refreshing to see the DIY ethos married to a frank desire to make actual, physical books.”
— Boston Globe

Praise for Joseph Gordon-Levitt and hitRECord on TV!: “Innovative . . . Like a mashup of the open-source coding movement and old-fashioned variety shows.”
— Rolling Stone

“A refreshing new approach to television that should not be missed.”
— TimeOut Chicago

“Gordon-Levitt has unshakable cred among the 18-to-34-year-old demo . . . but the cool thing about ‘HitRecord on TV’ is that it’s just great TV for anyone.”
— San Francisco Chronicle