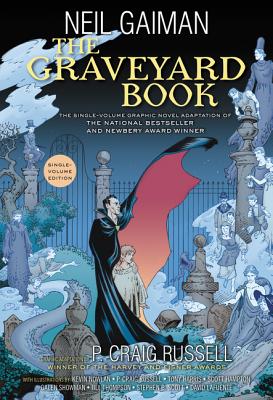 Both volumes of the New York Times bestselling The Graveyard Book Graphic Novel are now available in a single-volume paperback edition!

Each chapter in this adaptation by P. Craig Russell—now combined into one splendid volume—is illustrated by a different luminary from the comic book world, showcasing a variety of styles from a breadth of talent. Together, they bring Neil Gaiman’s Newbery Medal-winning, nationally bestselling novel The Graveyard Book to new life in this gorgeously illustrated graphic novel adaptation.

Neil Gaiman is a #1 New York Times bestselling author of books for children and adults whose award-winning titles include Norse Mythology, American Gods, The Graveyard Book, Good Omens (with Terry Pratchett), Coraline, and The Sandman graphic novels. Neil Gaiman is a Goodwill Ambassador for UNHCR and Professor in the Arts at Bard College.

P. Craig Russell lives in Kent, Ohio, and has spent forty years producing graphic novels, comic books, and illustrations. He is well-known for his graphic novel adaptations of Neil Gaiman's Coraline and Sandman: The Dream Hunters, as well as his Fairy Tales of Oscar Wilde series. His work ranges from such mainstream titles as Batman, Star Wars, and Conan to adaptations of classic operas and a Jungle Book series. He has won several Harvey and Eisner Awards.