All True Not a Lie in It: A Novel (Paperback) 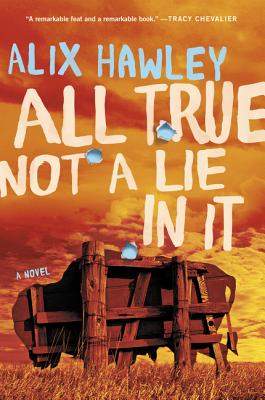 The story of pioneer Daniel Boone’s life, told in his voice—a tall tale like no other, startling, funny, poignant, romantic and brawling—set during the American Revolutionary War

Here is Daniel Boone as you’ve never seen him: debut novelist Alix Hawley presents Boone’s life, from his childhood in a Quaker colony, through two stints captured by Indians as he attempted to settle Kentucky, the death of a son at the hands of the same Indians and the rescue of a daughter. The prose rivals Hilary Mantel’s and Peter Carey’s, conveying that sense of being inside the head of a storied historical figure about which much nonsense is spoken while also feeling completely contemporary.

Boone was a fabulous hunter and explorer, and a “white Indian,” perhaps happiest when he found a place as the captive, adopted son of a chief who was trying to prevent the white settlement of Kentucky. Hawley takes us intimately into the life-and-death survival of people pushing away from security and into Indian lands, despite sense and treaties, just before and into the War of Independence.

The love story between Boone and his wife, Rebecca, is rich and tangled, but mostly it’s Boone who fascinates, pushing into places where he imagines he can create a new “clean” world, only to find death and trouble and complication. He is a fabulous character, unrivaled in North American literature, and a prime candidate for the tall tale. The storytelling is taut and expert, the descriptions rich and powerful, the prose full of feeling, but Boone is what drives this outstanding debut.

Alix Hawley studied English literature and creative writing at Oxford University, the University of East Anglia and the University of British Columbia. She published a story collection, The Old Familiar, with Thistledown Press in 2008. She won the 2014 Canada Writes Bloodlines competition, judged by Lawrence Hill, and was runner-up for the CBC Literary Award for short stories in 2012 and 2014. She teaches at Okanagan College in Kelowna, British Columbia, where she lives with her family.