Girl in the Rearview Mirror: A Novel (Paperback) 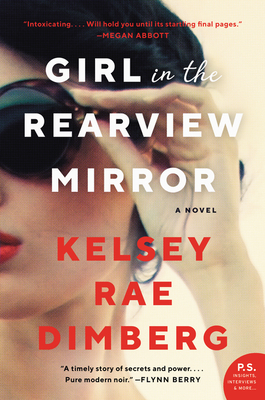 “With hairpin twists and immense psychological acuity, Kelsey Rae Dimberg’s Girl in the Rearview Mirror is as seductive as the glamorous, privileged family at its center—and as cunning. An exciting, intoxicating debut, it will hold you until its startling final pages.” — Megan Abbott, bestselling author of Dare Me and Give Me Your Hand

I never meant to lie. That is, I never wanted to.

They are Phoenix’s First Family: handsome Philip Martin, son of the sitting Senator, an ex-football player who carries himself with an easy grace and appears destined to step into his father’s seat when the time is right; his wife Marina, the stylish and elegant director of Phoenix’s fine arts museum; and their four-year-old daughter Amabel, beautiful and precocious and beloved.

Finn Hunt is working a dull office job to pay off her college debt when she meets Philip and charms Amabel. She eagerly agrees to nanny, thinking she’s lucked into the job of a lifetime. Though the glamour of the Martins’ lifestyle undeniably dazzles Finn, her real pleasure comes from being part of the family: sharing quick jokes with Philip in the kitchen before he leaves for work; staying late when Marina needs a last-minute sitter; and spending long days with Amabel, who is often treated more like a photo op than a child.

But behind every façade lurks a less attractive truth. When a young woman approaches Finn, claiming a connection with Philip and asking Finn to pass on a message, Finn becomes caught up in a web of deceit with the senate seat at its center. And Finn isn’t exactly innocent herself: she too has a background she has kept hidden, and under the hot Phoenix sun, everything is about to be laid bare. . . .

Kelsey Rae Dimberg received an MFA from the University of San Francisco and studied at Barrett Honors College of Arizona State University, where she was editor-in-chief of the literary magazine, Lux, and received the Swarthout Award in Fiction. Girl in the Rearview Mirror is her first novel. Born in Seattle, Kelsey has lived in eight states, and currently resides in Milwaukee.

“With hairpin twists and immense psychological acuity, Kelsey Rae Dimberg’s Girl in the Rearview Mirror is as seductive as the glamorous, privileged family at its center—and as cunning. An exciting, intoxicating debut, it will hold you until its startling final pages.” — Megan Abbott, bestselling author of Dare Me and Give Me Your Hand

"Gripping and cinematic, this debut is pure modern noir. A timely story of secrets and power that tips the conventions of the genre on their head."   — Flynn Berry, Edgar-Award winning author of Under the Harrow

“Utterly compelling, this story reveals its secrets slowly and mysteriously under the sweltering sun of Arizona. A gripping story that expertly weaves domestic and political intrigue.” — Rosamund Lupton, bestselling author of Sister

“A thrilling, thoughtful, and suspenseful debut that shines a light into how power changes everyone who has it, or is in close enough proximity to be consumed by it.”  — Sarah Weinman, author of The Real Lolita: The Kidnapping of Sally Horner and the Novel That Scandalized the World

“Laden with intelligence, shocks and arresting prose...Even the most astute readers of suspense fiction will find themselves engulfed by multiple stunners, including an explosive and unforeseen conclusion.” — Free-Lance Star (Fredericksburg, VA)

“I felt the ghost of Mary Jo Kopechne hovering among the pages of Girl in the Rearview Mirror, a riveting tale of an appealing young woman caught in the thrall of a powerful political family’s prestige and privilege.” — Hallie Ephron, New York Times bestselling author of Careful What You Wish For

“I tore through Girl in the Rearview Mirror; it really is a truly accomplished debut. Kelsey Rae Dimberg has that rare ability to blend breakneck pace with razor-sharp characterisation and shimmering, immersive prose.  A charged, tense, highly emotional story that will stay with you.” — Caz Frear, author of Sweet Little Lies and Stone Cold Heart

“As beguiling a tale as the famous family at its center...Both a mystery and a pointed portrait of wealth and privilege. It is a story of the thrill of stepping beneath the spotlight and the stark reckoning that awaits those who are cast out from beneath its glow.” — Meghan MacLean Weir, author of The Book of Essie

&#8220Finn…proves to be an electrifyingly unreliable narrator. Told from her perspective, the story takes on a mirage-like quality. Dimberg's prose, meanwhile, zips along like a sand-kicking roadrunner, and the overall pace of the novel is adeptly timed. Gripping and glamorous, Girl in the Rearview Mirror is part political thriller, part domestic noir and 100% entertaining.”  — Shelf Awareness