The State Must Provide: The Definitive History of Racial Inequality in American Higher Education (Paperback) 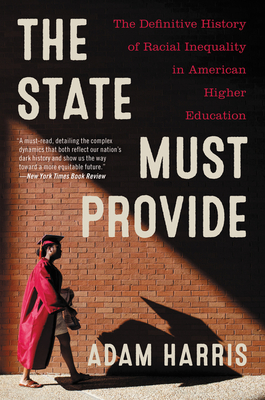 “A book that both taught me so much and also kept me on the edge of my seat. It is an invaluable text from a supremely talented writer.” —Clint Smith, author of How the Word is Passed

America’s colleges and universities have a shameful secret: they have never given Black people a fair chance to succeed. From its inception, our higher education system was not built on equality or accessibility, but on educating—and prioritizing—white students. Black students have always been an afterthought. While governments and private donors funnel money into majority white schools, historically Black colleges and universities (HBCUs), and other institutions that have high enrollments of Black students, are struggling to survive, with state legislatures siphoning away federal funds that are legally owed to these schools. In The State Must Provide, Adam Harris reckons with the history of a higher education system that has systematically excluded Black people from its benefits.

Harris weaves through the legal, social, and political obstacles erected to block equitable education in the United States, studying the Black Americans who fought their way to an education, pivotal Supreme Court cases like Plessy v. Ferguson and Brown v. Board of Education, and the government’s role in creating and upholding a segregated education system. He explores the role that Civil War–era legislation intended to bring agricultural education to the masses had in creating the HBCUs that have played such a major part in educating Black students when other state and private institutions refused to accept them.

The State Must Provide is the definitive chronicle of higher education’s failed attempts at equality and the long road still in front of us to remedy centuries of racial discrimination—and poses a daring solution to help solve the underfunding of HBCUs. Told through a vivid cast of characters, The State Must Provide examines what happened before and after schools were supposedly integrated in the twentieth century, and why higher education remains broken to this day.

ADAM HARRIS is a staff writer at The Atlantic, where he has covered education and national politics since 2018. He was previously a reporter at the Chronicle of Higher Education, where he covered federal education policy and historically Black colleges and universities. He is a 2021 New America Fellow and the recipient of the Rising Star Award by the News Media Alliance.

“Harris’s writing is as refreshing as it is haunting…. ‘The State Must Provide’ is a must-read, detailing the complex dynamics that both reflect our nation’s dark history and show us the way toward a more equitable future.”  — New York Times Book Review

“Adam Harris is a brilliant storyteller. He has used his unique literary gifts to synthesize two centuries of history in order to construct an historical account of higher-education that reads like a novel. The State Must Provide is a book that both taught me so much and also kept me on the edge of my seat. It is an invaluable text from a supremely talented writer.” — Clint Smith, author of How the Word is Passed

"[Harris's] new book, "The State Must Provide," explains how slavery, segregation and continuing racism prevented or stymied Black education. He examines some of the turning points when higher education could have been made equal and centuries of discrimination could have been remedied. He also writes about the important role historically Black colleges and universities have played and the reasons why they have remained underfunded." — NPR's Fresh Air

"Adam Harris debunks the myths and exposes the systemic racism that exists within the higher education system.... Through Harris’ investigations, personal accounts and reporting, The State Must Provide gives an 'incisive, definitive history of HBCUs.' It is a telling of the critical failures that exist within the higher education system and how colleges in America have never given their Black students a real chance to succeed." — The Root

"[Harris's] account indicts a system that should be upholding higher ideals of equality while also offering ideas on what must change." — Literary Hub

“Profound and thought-provoking, this work is recommended for anyone who wants to understand the structural inequities of the U.S. educational system.” — Library Journal (starred review)

"Sharp and vigorous.... Fluently organized and lucidly written, this thought-provoking exposé is a worthy contribution to the debate over how to make American education more equitable." — Publishers Weekly

“A spectacular book—the research alone is a tour de force. Harris makes an indisputable argument about the historical and ongoing role of the state in crippling Black higher education in a book that is passionate and a delight to read.” — Ted Mitchell, President of the American Council on Education and former Under Secretary of the U.S. Department of Education

"Adam Harris shows how the dark history of America's vaunted higher education system continues to prevent true equality. He's the kind of journalist we most need: meticulous in his research, careful in his thinking, passionate in his vision. This book is powerful, quietly angry, revelatory, and utterly persuasive." — George Packer, author of Last Best Hope and The Unwinding

“Adam Harris’s definitive and necessary book shows how thoroughly the U.S. has barred Black people from its halls of higher learning, and how high those barriers remain today. Harris’s storytelling is vivid, his reporting is immaculate, and his case is damning. This book is a punch in the gut. Let it also be a line in the sand.” — Ed Yong, author of I Contain Multitudes