On Treason: A Citizen's Guide to the Law (Hardcover) 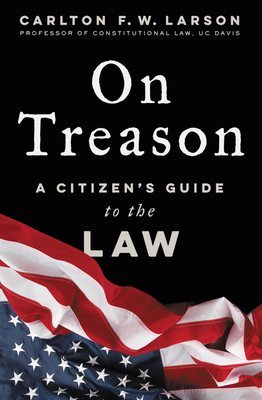 A concise, accessible, and engaging guide to the crime of treason, written by the nation’s foremost expert on the subject

Treason—the only crime specifically defined in the United States Constitution—is routinely described by judges as more heinous than murder. Today, the term is regularly tossed around by politicians and pundits on both sides of the aisle. But, as accusations of treason flood the news cycle, it is not always clear what the crime truly is, or when it should be prosecuted.

Carlton F. W. Larson, a scholar of constitutional law and legal history, takes us on a journey to understand the many subtleties of the Constitution’s definition of treason. With examples ranging from the medieval English Parliament to the accusations against Edward Snowden and Donald Trump, Larson brings to life not only the most notorious accused traitors, such as Benedict Arnold, Aaron Burr, and World War II’s “Tokyo Rose,” but also lesser-known figures, such as Hipolito Salazar, the only person ever executed by the federal government for treason, and Walter Allen, a labor union leader convicted of treason against the state of West Virginia in the early 1920s.

Grounded in over two decades of research, On Treason is an indispensable guide for anyone who wants to understand the role of treason law in our constitutional democracy. With this brisk, clear look at the law’s history and meaning, Larson explains who is actually guilty and when—and readers won’t need a law degree to understand why.

Carlton F.W. Larson is a Martin Luther King, Jr. Professor of Law at the University of California, Davis, School of Law, where he teaches American constitutional law and English and American legal history. A graduate of Harvard College and Yale Law School, Larson is one of the nation’s leading authorities on the law of treason. His scholarship has been cited by numerous federal and state courts, and has been highlighted in the New York Times and many other publications.  He is a frequent commentator for the national media on constitutional law issues and is the author of the book The Trials of Allegiance: Treason, Juries, and the American Revolution (Oxford University Press, 2019).

“A fluent, case-rich examination of the laws governing treason and its punishment. . . . Larson examines the notion clearly and accessibly.”
— Kirkus Reviews

"There have always been traitors in our midst, real and imagined. From Benedict Arnold to Aaron Burr to today's late-night Twitter rants, the history of treason has been the history of America's most perilous moments. At the intersection of law and lore, On Treason brings to life the thrilling stories of the patriots and poltroons who have grappled with the sin of all sins in American life."
— Andrei Cherny, author of The Candy Bombers: The Untold Story of the Berlin Airlift and America's Finest Hour and president of Democracy Journal

"With clarity and grace, Carlton Larson reminds us that treason is a legal concept with an important history from the Revolution through the War on Terror.  Engaging, elegant, and refreshingly sane, On Treason dares to suggest that the crime’s narrow contours and difficult evidentiary hurdles enhance our democracy.  Our political opponents are almost certainly not traitors—Larson delivers this hard truth, which offers a first step to a more perfect Union."
— Daniel J. Sharfstein, author of Thunder in the Mountains: Chief Joseph, Oliver Otis Howard, and the Nez Perce War

“Carlton Larson has pulled off a small miracle, writing a terrific and timely book that is both informative and a joy to read. He explains the law of treason in crystal-clear prose. And he brings the law to life with vivid and fascinating stories of America's most notorious traitors.  On Treason is a must-read for anyone who wants to understand what treason means—and doesn't mean—in this fraught political moment.”
— Thomas Healy, author of The Great Dissent: How Oliver Wendell Holmes Changed His Mind—and Changed the History of Free Speech in America.

“In these hyperpartisan, polarized times, as charges of treason fly thick and fast, it’s essential to remember how the Framers of our Constitution defined that crime—and why. This indispensable book brings much-needed clarity to the subject and reaffirms a fundamental truth of our constitutional design: there is such a thing as the loyal opposition.”
— Kermit Roosevelt, Professor of Law, University of Pennsylvania Law School and author of In the Shadow of the Law