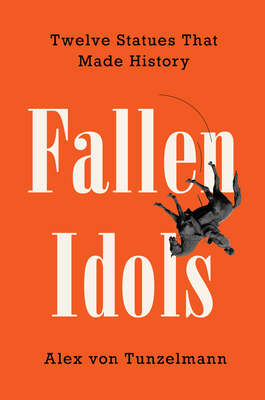 An Economist Best Book of the Year

In this timely and lively look at the act of toppling monuments, the popular historian and author of Blood and Sand explores the vital question of how a society remembers—and confronts—the past.

In 2020, history came tumbling down. From the US and the UK to Belgium, New Zealand, and Bangladesh, Black Lives Matter protesters defaced, and in some cases, hauled down statues of Confederate icons, slaveholders, and imperialists. General Robert E. Lee, head of the Confederate Army, was covered in graffiti in Richmond, Virginia. Edward Colston, a member of Parliament and slave trader, was knocked off his plinth in Bristol, England, and hurled into the harbor. Statues of Christopher Columbus were toppled in Minnesota, burned and thrown into a lake in Virginia, and beheaded in Massachusetts. Belgian King Leopold II was set on fire in Antwerp and doused in red paint in Ghent. Winston Churchill’s monument in London was daubed with the word “racist.” As these iconic effigies fell, the backlash was swift and intense.

But as the past three hundred years have shown, history is not erased when statues are removed. If anything, Alex von Tunzelmann reminds us, it is made.

Exploring the rise and fall of twelve famous, yet now controversial statues, she takes us on a fascinating global historical tour around North America, Western and Eastern Europe, Latin America and Asia, filled with larger than life characters and dramatic stories. Von Tunzelmann reveals that statues are not historical records but political statements and distinguishes between statuary—the representation of “virtuous” individuals, usually “Great Men”—and other forms of sculpture, public art, and memorialization. Nobody wants to get rid of all memorials. But Fallen Idols asks: have statues had their day?

Alex von Tunzelmann is the author of Blood and Sand, Indian Summer, and Red Heat. She lives in London.

"The heart of the book is von Tunzelmann’s 12 chapter-long stories of figures famous enough to have become the subjects of commemorative statues, and then controversial enough to have some or all of these monuments removed. . . . Many of these stories are fascinating. . . .Von Tunzelmann ends the book with a strong argument. . . . If a book’s purpose is to tell you stories and leave you with an idea, this idea of better styles of commemoration will stay with me."  — James Fallows, New York Times Book Review

“Thoughtful and fast-paced…. [Von Tunzelmann] makes a compelling case that scrutinizing monumental statuary is an integral part of what open societies do as they reassess past values and seek new ones to guide their futures…. A convincing, logic-driven argument that cuts through the emotional and ideological static around statue toppling, which often obscures the facts about how and why they were put up in the first place.”  — Washington Post

“One of the best books there is for understanding the long story behind our own ‘statue wars’.” — Mary Beard, The Guardian

“Brisk and informative. . . . Enriched by accessible history lessons and trenchant analysis of contemporary politics and culture, this is a persuasive call for a ‘much wider and more mature engagement with the past.’”  — Publishers Weekly

“An illuminating guide to a much-needed discussion about history and how it is represented.”  — BookPage

“A lively, engaging and often witty exploration of why statues are put up, why they are taken down and what this teaches us about history and memory. It’s extremely well researched. . . . In this fascinating book [von Tunzelmann] asks us to look ‘beyond the binaries of pride and shame, good and bad, heroes and villains’ and think more deeply about how history is made.”  — Sunday Times (London)

“Gripping. . . . Von Tunzelmann, an Oxford educated historian with an eye for human detail as well as a sure-handed grasp of the larger picture, does a marvelous job of recreating the tension and bungling that swept up up Cairo, London, Moscow, Budapest, Paris and Washington during the harrowing two weeks of Oct. 22 to Nov. 26, 1956.... Not only exciting and satisfying but also timely.” — Evan Thomas, New York Times Book Review, on Blood and Sand

“Anchored with fresh documentary evidence, Blood and Sand is a riveting re-evaluation of the Cold War crises of 1956: Suez and Hungary. Alex von Tunzelmann has written a definitive history of these crucial events — a real page-turner and monument to first-rate scholarship.” — Douglas Brinkley, Professor of History at Rice University and author of Rightful Heritage: Franklin D. Roosevelt and the Land of America, on Blood and Sand

“This thrilling ticktock brings the emotional core of geopolitical maneuvering into dramatic focus, with portraits of leaders variously honorable, pigheaded, irresolute, pusillanimous, and susceptible to mood swings.” — The New Yorker on Blood and Sand

“This book offers a shrewd, exciting history of the Suez crisis of 1956, and makes a clear case for its relevance today.” — New York Times on Blood and Sand

“The effect is a cinematic, you-are-there style of history-writing, which plunges the reader into the chaos of events.” — Adam Kirsch, Tablet, on Blood and Sand