Act of Oblivion: A Novel (Hardcover) 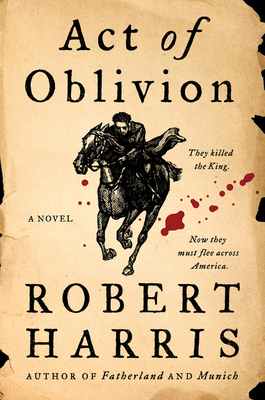 From the bestselling author of Fatherland, The Ghostwriter, Munich, and Conclave comes this spellbinding historical novel that brilliantly imagines one of the greatest manhunts in history: the search for two Englishmen involved in the killing of King Charles I and the implacable foe on their trail—an epic journey into the wilds of seventeeth-century New England, and a chase like no other.

'From what is it they flee?'

He took a while to reply. By the time he spoke the men had gone inside. He said quietly, “They killed the King.”

1660 England. General Edward Whalley and his son-in law Colonel William Goffe board a ship bound for the New World. They are on the run, wanted for the murder of King Charles I—a brazen execution that marked the culmination of the English Civil War, in which parliamentarians successfully battled royalists for control.

But now, ten years after Charles’ beheading, the royalists have returned to power. Under the provisions of the Act of Oblivion, the fifty-nine men who signed the king’s death warrant and participated in his execution have been found guilty in absentia of high treason. Some of the Roundheads, including Oliver Cromwell, are already dead. Others have been captured, hung, drawn, and quartered. A few are imprisoned for life. But two have escaped to America by boat.

In London, Richard Nayler, secretary of the regicide committee of the Privy Council, is charged with bringing the traitors to justice and he will stop at nothing to find them. A substantial bounty hangs over their heads for their capture—dead or alive. . . .

Robert Harris’s first historical novel set predominantly in America, Act of Oblivion is a novel with an urgent narrative, remarkable characters, and an epic true story to tell of religion, vengeance, and power—and the costs to those who wield it.

Robert Harris is the award-winning author of fourteen internationally bestselling novels, including Fatherland, Enigma, Archangel, Pompeii, The Ghost Writer, The Fear Index, An Officer and a Spy, Conclave, Munich, The Second Sleep, and V2, as well as his trilogy of novels about the Roman statesman Cicero Imperium, Conspirata and Dictator. His novels have been translated into 40 languages, and seven have been adapted for the screen, including most recently Munich, a Netflix feature film starring Jeremy Irons as Neville Chamberlain. Harris earned a degree in English from Cambridge University; before becoming a full-time novelist he worked as a reporter for the BBC, was political editor of the Observer, and a columnist for the London Sunday Times and the Daily Telegraph. He is married to the writer Gill Hornby and lives in England; they have four children.

“Robert Harris brings his signature storytelling power to an exciting manhunt through colonial America. Act of Oblivion pulls off historical fiction's greatest challenge, transporting readers into the heart of a formative era with momentum and suspense. A twisty labyrinth of espionage and intrigue.” — Matthew Pearl, New York Times bestselling author of The Dante Club and The Taking of Jemima Boone

“Harris (Munich) again turns a historical event into a canny page-turner. . . . Harris humanizes the hunter and the hunted, and brings to life an obscure chapter in colonial American history. This further burnishes Harris’s reputation as a talented author of historical suspense.” — Publishers Weekly

“It will come as no surprise to readers familiar with Harris’ work that this is a splendidly written historical novel. Harris really is a joy to read . . . Another top-flight effort from a master storyteller.” — Booklist

"Act of Oblivion is a belter of a thriller. It will be compulsive reading for those who loved An Officer and a Spy, Harris’s book about the Dreyfus affair. Like that novel, the research is immaculate. A chewy, morally murky slice of history is made into a thriller that twists and surprises. The characters are strong and we care about their predicament. The story stretches over continents and years, but the suspense feels as taut as if the three main characters were locked in a room with a gun." — The Times UK

“Harris (V2: A Novel of World War II) demonstrates his talent for bringing history to life with a taut new tale of faith and vengeance. . . . the raw emotions of the characters and the issues that drive human dissent make this a worthwhile read.” — Library Journal

"Act of Oblivion delivers a galloping adventure, with a novel of ideas craftily packed into its saddlebags.” — The Wall Street Journal

“A tale that grips from start to finish. It’s a remarkable achievement.” — Metro

"A gripping revenger's tale. . . . This is by far Harris’s best book since An Officer and a Spy, which dealt with another great national division: the Dreyfus case. He has produced a ripping page-turner that breathes all the complexities and moral nuances of the Civil War period." — Financial Times

"It is easy to forget that Act of Oblivion is a fictional work based on actual events, which is a testament to Robert Harris’ writing. The book provides not only significant amounts of European history, but also thrilling suspense over Nayler’s pursuit of his final two targets . . . . Learning European history was never this much fun in school!" — Bookreporter

"Veteran actor Tim McInnerny delivers a masterly narration of Harris’s novel. He truly inhabits the characters, his voice and manner finely tuned to the personality and convictions of each: Goffe, a fanatical, millenarian Puritan; Whalley, more practical and ultimately disillusioned; Nayler, smoothly menacing, but prey to depression . . . this production is perfect." — Washington Post