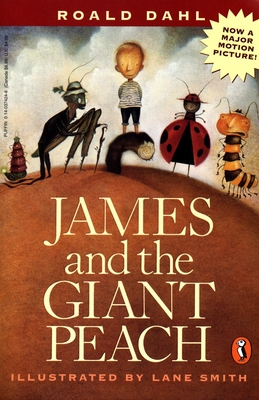 From the bestselling author of Charlie and the Chocolate Factory and The BFG!

Roald Dahl was a champion of the underdog and all things little—in this case, an orphaned boy oppressed by two nasty, self-centered aunts. How James escapes his miserable life with the horrible aunts and becomes a hero is a Dahlicious fantasy of the highest order. You will never forget resourceful little James and his new family of magically overgrown insects—a ladybug, a spider, a grasshopper, a glowworm, a silkworm, and the chronic complainer, a centipede with a hundred gorgeous shoes. Their adventures aboard a luscious peach as large as a house take them across the Atlantic Ocean, through waters infested with peach-eating sharks and skies inhabited by malevolent Cloudmen, to a ticker-tape parade in New York City.

This happily ever after contemporary fairy tale is a twentieth-century classic that every child deserves to know. And Lane Smith's endearingly funny illustrations are a perfect match for the text.

"All the gruesome imagery of old-fashioned fairy tales and a good measure of their breathtaking delight." —Kirkus Reviews

"A stunning book, to be cherished for its story, a superb fantasy." —The Chicago Tribune

"The most original fantasy that has been published in a long time...[it] may well become a classic." —San Francisco Chronicle

"This newly-illustrated edition of an avowed children's favorite has all the makings of a classic match-up: Milne had Shepard, Carroll had Tenniel, and now Dahl has Smith...author and illustrator were made for each other, and it's of little consequence that it took almost 35 years for them to meet" --Kirkus.