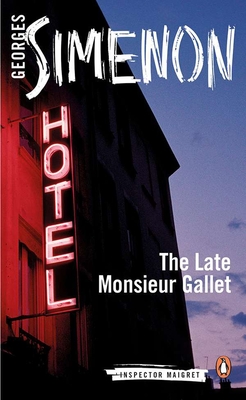 By Georges Simenon, Anthea Bell (Translated by)
$11.00
On Our Shelves Now

This is book number 2 in the Inspector Maigret series.

Georges Simenon's gift for writing economical crime stories that somehow ride the line between hardboiled terseness and deadpan whimsy is really on display in this short novel. Inspector Maigret is assigned to a superficially banal murder investigation that gets twistier and harder to solve with each new discovery.

“One of the greatest writers of the twentieth century . . . Simenon was unequaled at making us look inside, though the ability was masked by his brilliance at absorbing us obsessively in his stories.” —The Guardian

Georges Simenon’s devastating tale of misfortune, betrayal and the weakness of family ties

“Instead of the detail filling itself in and becoming clearer, it seemed to escape him. The face of the man in the ill-fitting coat just misted up so that it hardly looked human. In theory this mental portrait was good enough, but now it was replaced by fleeting images which should have added up to one and the same man but which refused to get themselves into focus.”

The circumstances of Monsieur Gallet’s death all ring false: the name the deceased was travelling under and his presumed profession, and more worryingly, his family's grief. Their haughtiness seems to hide ambiguous feelings about the hapless man. In this haunting story, Maigret discovers the appalling truth and the real crime hidden behind the surface of lies.

Georges Simenon (1903–1989) was born on February 12th, 1903 in Liege, Belgium. At the age of nineteen, Simenon embarked to Paris to begin a career as a writer.  In 1923 he began publishing under various pseudonyms, and in 1929 began the Inspector Maigret series which helped elevate him to become a household name in continental Europe.  His prolific output of more than four hundred novels and the gripping, dark realism of his prose has cemented him as an inedlible fixture of twentieth century literature.  He died in 1989 in Lausanne, Switzerland.

Anthea Bell is the award-winning translator of numerous French and German works: from the Asterix comics to W. G. Sebald’s literary masterpiece Austerlitz.

“One of the greatest writers of the twentieth century . . . Simenon was unequaled at making us look inside, though the ability was masked by his brilliance at absorbing us obsessively in his stories.” —The Guardian

“These Maigret books are as timeless as Paris itself.” —The Washington Post

“Maigret ranks with Holmes and Poirot in the pantheon of fictional detective immortals.” —People

“I love reading Simenon. He makes me think of Chekhov.” —William Faulkner

“The greatest of all, the most genuine novelist we have had in literature.” —André Gide

“A novelist who entered his fictional world as if he were a part of it.”lle —Peter Ackroyd