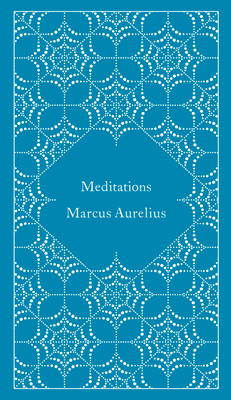 A new translation of the philosophical journey that has inspired luminaries from Matthew Arnold to Bill Clinton in a beautiful hardcover gift edition, with a cover designed by Coralie Bickford-Smith

World-changing ideas meet eye-catching design: the best titles of the extraordinarily successful Great Ideas series are now packaged in Coralie Bickford-Smith’s distinctive, award-winning covers. Whether on a well-curated shelf or in your back pocket, these timeless works of philosophical, political, and psychological thought are absolute must-haves for book collectors as well as design enthusiasts.

Written in Greek by an intellectual Roman emperor without any intention of publication, the Meditations of Marcus Aurelius  offer a wide range of fascinating spiritual reflections and exercises developed as the leader struggled to understand himself and make sense of the universe. Spanning from doubt and despair to conviction and exaltation, they cover such diverse topics as the question of virtue, human rationality, the nature of the gods and the values of leadership. But while the Meditations were composed to provide personal consolation, in developing his beliefs Marcus also created one of the greatest of all works of philosophy: a series of wise and practical aphorisms that have been consulted and admired by statesmen, thinkers and ordinary readers for almost two thousand years.

To provide a full understanding of Aurelius's seminal work, this edition includes explanatory notes, a general index, an index of quotations, an index of names, and an introduction by Diskin Clay putting the work in its biographical, historical, and literary context, a chronology of Marcus Aurelius's life and career.

Marcus Aelius Aurelius Antoninus (121-180 CE) was adopted by the emperor Antoninus Pius and succeeded him in 161, (as joint emperor with adoptive brother Lucius Verus). The last of the so-called Five Good Emperors, he ruled alone from 169.  Presiding over a changing Rome, he spent much of his reign in putting down variou rebellions. Today, he is best-know for his Meditations, a series of reflections, strongly influenced by Epictetus, which cemented his place as one of the greatest Stoic Philosophers. He died in 180 and was succeed by his natural son, thus ending the period of the adoptive emperors.

Diskin Clay is Professor Emeritus of Classical Studies at Duke University and has published widely in the area of Ancient Greek Philosophy.

Martin Hammond was Head Master of Tonbridge School and has translated many works of classic literature, including Homer's Iliad for Penguin Classics.

“Here, for our age, is [Marcus’s] great work presented in its entirety, strongly introduced and freshly, elegantly translated.” —Robert Fagles