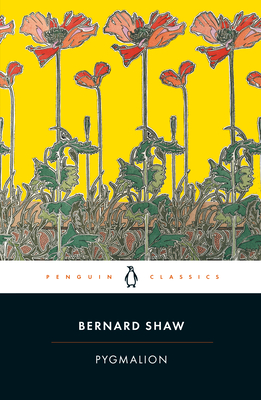 Exclusive to Penguin Classics: the definitive text of Shaw’s brilliantly witty exposure of the British class system—part of the official Bernard Shaw Library

Shaw wrote the part of Eliza Doolittle—“an east-end dona with an apron and three orange and red ostrich feathers”—for Mrs. Patrick Campbell, with whom he had a passionate but unconsummated affair. From the outset the play was a sensational success, although Shaw, irritated by its popularity at the expense of his artistic intentions, dismissed it as a potboiler. The Pygmalion of legend falls in love with his perfect female statue and persuades Venus to bring her to life so that he can marry her. But Shaw radically reworks Ovid’s tale to give it a feminist slant: while Higgins teaches Eliza to speak and act like a duchess, she also asserts her independence, adamantly refusing to be his creation.

This Penguin Classics edition is the definitive text produced under the editorial supervision of Dan H. Laurence, with an illuminating introduction by Nicholas Grene, discussing the language and politics of the play. Included in this volume is Shaw’s preface, as well as his “sequel” written for the first publication in 1916, to rebut public demand for a more conventionally romantic ending.

For more than seventy years, Penguin has been the leading publisher of classic literature in the English-speaking world. With more than 1,800 titles, Penguin Classics represents a global bookshelf of the best works throughout history and across genres and disciplines. Readers trust the series to provide authoritative texts enhanced by introductions and notes by distinguished scholars and contemporary authors, as well as up-to-date translations by award-winning translators.

George Bernard Shaw (1856–1950) is one of the world’s greatest literary figures. Born in Dublin, Ireland, he left school at fourteen and in 1876 went to London, where he began his literary career with a series of unsuccessful novels. In 1884 he became a founder of the Fabian Society, the famous British socialist organization. After becoming a reviewer and drama critic, he published a study of the Norwegian dramatist Henrik Ibsen in 1891 and became determined to create plays as he felt Ibsen did: to shake audiences out of their moral complacency and to attack social problems. However, Shaw was an irrepressible wit, and his plays are as entertaining as they are socially provocative. Basically shy, Shaw created a public persona for himself: G.B.S., a bearded eccentric, crusading social critic, antivivisectionist, language reformer, strict vegetarian, and renowned public speaker. The author of fifty-three plays, hundreds of essays, reviews, and letters, and several books, Shaw is best known for Widowers’ Houses, Mrs. Warren’s Profession, Arms and the Man, Caesar and Cleopatra, Man and Superman, Major Barbara, Pygmalion, Heartbreak House, and Saint Joan. He was awarded the Nobel Prize in Literature in 1925.

Dan H. Laurence (series editor; 1920–2008) was series editor for the works of George Bernard Shaw in Penguin. Formerly a New York University faculty member, Mr. Laurence left his tenured position in 1970 to dedicated his life to the collection and curation of Shaw's life, work, and letters. He served as the official literary advisor to Shaw's estate and published four volumes of his correspondence.

“[Shaw] did his best in redressing the fateful unbalance between truth and reality, in lifting mankind to a higher rung of social maturity. He often pointed a scornful finger at human frailty, but his jests were never at the expense of humanity.” —Thomas Mann

“Shaw will not allow complacency; he hates second-hand opinions; he attacks fashion; he continually challenges and unsettles, questioning and provoking us even when he is making us laugh. And he is still at it. No cliché or truism of contemporary life is safe from him.” —Michael Holroyd

“In his works Shaw left us his mind. . . . Today we have no Shavian wizard to awaken us with clarity and paradox, and the loss to our national intelligence is immense.” —The Sunday Times

“He was a Tolstoy with jokes, a modern Dr. Johnson, a universal genius who on his own modest reckoning put even Shakespeare in the shade.” —The Independent

“His plays were superb exercises in high-level argument on every issue under the sun, from feminism and God, to war and eternity, but they were also hits—and still are.” —The Daily Mail