Al Capone Does My Shirts (Tales from Alcatraz #1) (Paperback) 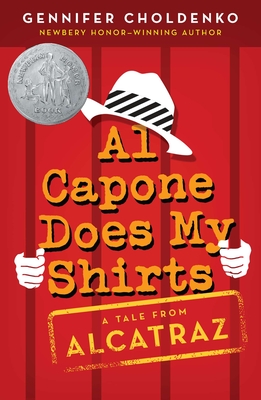 This is book number 1 in the Tales from Alcatraz series.

The Newbery Honor Book and New York Times Bestseller that is historical fiction with a hint of mystery about living at Alcatraz not as a prisoner, but as a kid meeting some of the most famous criminals in our history. Al Capone Does My Shirts has become an instant classic for all kids to read!

Today I moved to Alcatraz, a twelve-acre rock covered with cement, topped with bird turd and surrounded by water. I'm not the only kid who lives here. There are twenty-three other kids who live on the island because their dads work as guards or cooks or doctors or electricians for the prison, like my dad does. And then there are a ton of murderers, rapists, hit men, con men, stickup men, embezzlers, connivers, burglars, kidnappers and maybe even an innocent man or two, though I doubt it. The convicts we have are the kind other prisons don't want. I never knew prisons could be picky, but I guess they can. You get to Alcatraz by being the worst of the worst. Unless you're me. I came here because my mother said I had to.

"Al is the perfect novel for a young guy or moll who digs books by Gordon Korman, or Louis Sachar."—Time Out New York for Kids

"Heartstopping in some places, heartrending in others, and most of all, it is heartwarming."—San Francisco Chronicle

Gennifer Choldenko is the New York Times bestselling and Newbery Honor Award-winning author of ten children's books, including Notes From a Liar and Her Dog, If a Tree Falls at Lunch Period, No Passengers Beyond this Point, Al Capone Does My Shirts, Al Capone Shines My Shoes, and Al Capone Does My Homework. She lives in the San Francisco Bay Area with her family.