Al Capone Does My Homework (Tales from Alcatraz #3) (Paperback) 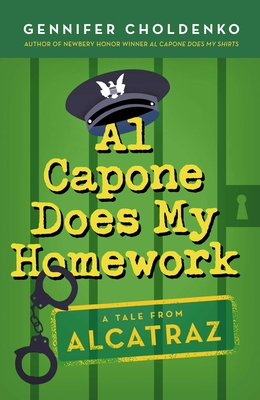 This is book number 3 in the Tales from Alcatraz series.

Alcatraz Island in the 1930s isn't the most normal place to grow up, but it's home for Moose Flanagan, his autistic sister, Natalie, and all the families of the guards. When Moose's dad gets promoted to Associate Warden, despite being an unlikely candidate, it's a big deal. But the cons have a point system for targeting prison employees, and his dad is now in serious danger. After a fire starts in the Flanagan's apartment, Natalie is blamed, and Moose bands with the other kids to track down the possible arsonist. Then Moose gets a cryptic note from the notorious Al Capone himself. Is Capone trying to protect Moose's dad too? If Moose can't figure out what Capone's note means, it may be too late.

The last heart-pounding installment in the New York Times bestselling, Newbery Honor-winning Alcatraz trilogy is not to be missed!

Gennifer Choldenko is the New York Times bestselling and Newbery Honor Award-winning author of ten children's books, including Notes From a Liar and Her Dog, If a Tree Falls at Lunch Period, No Passengers Beyond this Point, Al Capone Does My Shirts, Al Capone Shines My Shoes, and Al Capone Does My Homework. She lives in the San Francisco Bay Area with her family.

"Choldenko consistently excels at penning pitch-perfect dialogue and balancing a large cast of original characters, and this title is no exception....A satisfying finale to what has become a cornerstone series in contemporary children's literature." — Kirkus Reviews

"Choldenko's multifaceted novel offers something for everyone-history, mystery, intrigue, and humor. Ultimately, though, it's this extremely likable boy working through friendships and crushes, on the one hand, and wrestling with family and community problems, on the other, that has held our attention through three books." — The Horn Book

"Choldenko continues to infuse the Alcatraz community with warmth and originality. . .Despite being 'the roughest hard-time prison in America,' by the end of this winning series, it's also a place Moose comes to proudly call home." — Publishers Weekly, starred review