Dancing in the Wings (Paperback) 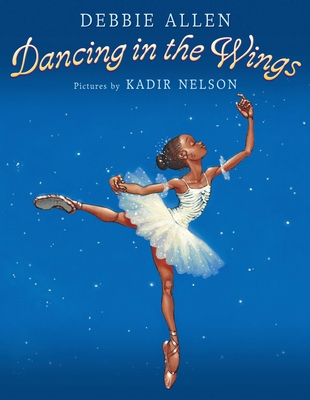 Sassy is a long-legged girl who always has something to say. She wants to be a ballerina more than anything, but she worries that her too-large feet, too-long legs, and even her big mouth will keep her from her dream. When a famous director comes to visit her class, Sassy does her best to get his attention with her high jumps and bright leotard. Her first attempts are definitely not appreciated, but with Sassy's persistence, she just might be able to win him over. Dancing in the Wings is loosely based on actress/choreographer Debbie Allen's own experiences as a young dancer.

Allen's Broadway career as a dancer, singer and actor began in the chorus of "Purlie". She next appeared in "Raisin", then in the 1979 production West Side Story", for which she won a prestigious Drama Desk Award, as well as, her first Tony Award nomination. Allen received another Tony Award nomination in 1986 for her role as Bob Fosse's "Sweet Charity".

Allen's choreography career soared in 1980 with the international hit TV series "Fame". In 1988 she went behind the scenes to choreograph the new American Musical "Carrie with the Royal Shakespeare Company" and has continued to devote herself to that discipline. She holds the distinction of having choreographed the Academy Awards for five consecutive years. Allen collaborated with James Ingram to create "Brothers of the Knight" which played at the prestigious Kennedy Center in Washington, DC in the spring of 1998.

Kadir Nelson is an award-winning illustrator and fine artist. He lives in San Diego, California.