Ghost Hunters: William James and the Search for Scientific Proof of Life After Death (Paperback) 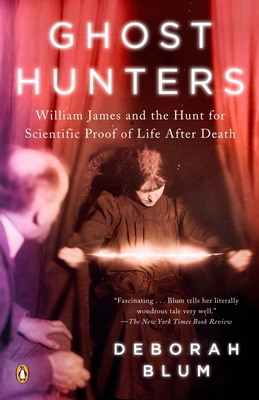 What if a world-renowned philosopher and professor of psychiatry at Harvard suddenly announced he believed in ghosts? At the close of the nineteenth century, the illustrious William James led a determined scientific investigation into "unexplainable" incidences of clairvoyance and ghostly visitations. James and a small group of eminent scientists staked their reputations, their careers, even their sanity on one of the most extraordinary quests ever undertaken: to empirically prove the existence of ghosts, spirits, and psychic phenomena. What they pursued—and what they found—raises questions as fascinating today as they were then.

Pulitzer Prize winner Deborah Blum is a professor of science journalism at the University of Wisconsin. She worked as a newspaper science writer for twenty years, winning the Pulitzer in 1992 for her writing about primate research, which she turned into a book, The Monkey Wars (Oxford, 1994). Her other books include Sex on the Brain (Viking, 1997) and Love at Goon Park (Perseus, 2002). She has written about scientific research for The Los Angeles Times, The New York Times, Discover, Health, Psychology Today, and Mother Jones. She is a past president of the National Association of Science Writers and now serves on an advisory board to the World Federation of Science Journalists and the National Academy of Sciences.

A fascinating reminder that reason and revelation are not opposites. (James Shreve, author of The Genome War)