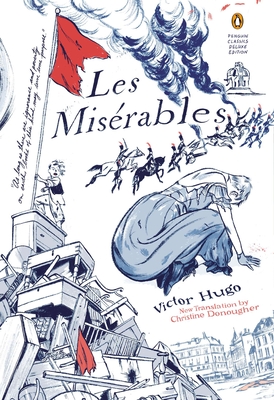 The first new Penguin Classics translation in forty years of Victor Hugo’s masterpiece, the subject of The Novel of the Century by David Bellos—published in a stunning Deluxe edition. Winner of the French-American Foundation & Florence Gould Foundation’s 29th Annual Translation Prize in Fiction.

The subject of the world’s longest-running musical and the award-winning film, Les Misérables is a genuine literary treasure. Victor Hugo’s tale of injustice, heroism, and love follows the fortunes of Jean Valjean, an escaped convict determined to put his criminal past behind him, and has been a perennial favorite since it first appeared over 150 years ago. This exciting new translation with Jillian Tamaki’s brilliant cover art will be a gift both to readers who have already fallen for its timeless story and to new readers discovering it for the first time.

VICTOR HUGO (1802–1885) was one of the most revered French writers of the nineteenth century.

CHRISTINE DONOUGHER is a freelance translator from French and Italian and a recipient of the Scott Moncrieff Translation Prize.

ROBERT TOMBS is a professor of history at St John’s College, Cambridge, England.

JILLIAN TAMAKI is an illustrator and comic artist and teaches at the School of Visual Arts in New York City.

“Donougher's translation is a magnificent achievement. It reads easily, sometimes racily, and Hugo's narrative power is never let down...[an] almost flawless translation, which brings the full flavour of one of the greatest novels of the nineteenth century to new readers in the twenty-first.”
—William Doyle, Times Literary Supplement

"The year's most interesting publication from Penguin Classics was actually [...] a new translation by Christine Donougher of the novel we all know as Les Misérables. You may think that 1,300 pages is a huge investment of time when the story is so familiar, but no adaptation can convey the addictive pleasure afforded by Victor Hugo's narrative voice: by turns chatty, crotchety, buoyant and savagely ironical, it's made to seem so contemporary and fresh in Donougher's rendering that the book has all the resonance of the most topical state-of-the-nation novel."
—Telegraph

"Christine Donougher's seamless and very modern translation of Les Misérables has an astonishing effect in that it reminds readers that Hugo was going further than any Dickensian lament about social conditions ... [Les Mis] touches the soul."
—Herald Scotland