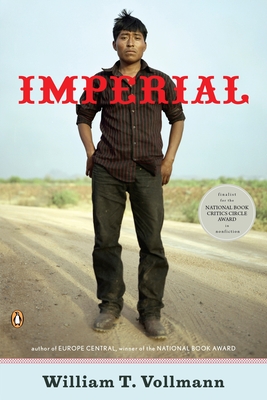 By William T. Vollmann
$40.00
Possibly out of print. Email or call to check availability and price.

For generations of migrant workers, Imperial Country has held the promise of paradise and the reality of hell. It sprawls across a stirring accidental sea, across the deserts, date groves and labor camps of Southeastern California, right across the border into Mexico. In this eye-opening book, William T. Vollmann takes us deep into the heart of this haunted region, exploring polluted rivers and guarded factories and talking with everyone from Mexican migrant workers to border patrolmen. Teeming with patterns, facts, stories, people and hope, this is an epic study of an emblematic region.

William T. Vollmann is the author of ten novels, including Europe Central, which won the National Book Award.  He has also written four collections of stories, including The Atlas, which won the PEN Center USA West Award for Fiction, a memoir, and six works of nonfiction, including Rising Up and Rising Down and Imperial, both of which were finalists for the National Book Critics Circle Award. He is the recipient of a Whiting Writers Award and the Strauss Living Award from the American Academy of Arts and Letters.  His journalism and fiction have been published in The New Yorker, Harpers, Esquire, Granta, and many other publications.

"Vollmann has penetrated the soul of a place that is like few others on earth, but whose hardships and triumphs tell you something universal about the durability and ambition of the human spirit." --The Economist

"No one who reads this singular, significant book--half Michael Harrington's The Other America, half James Joyce's Finnegans Wake--will contemplate NAFTA, illegal immigration, or a trip to a 'Southside' brothel without thinking of [Vollmann]." --The Washington Post

"Tracks the battles, real and metaphorical, that define Imperial County--battles over immigration and water, identity and the reach and limitations of political power. The book is perhaps the clearest expression of Vollmann's career-long commitment to immersing himself in complexities." --Los Angeles Times