In the Time of the Butterflies (Penguin Vitae) (Hardcover) 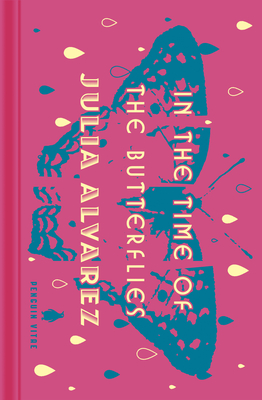 A collectible hardcover edition of Julia Alvarez's modern Latinx classic about four sisters known as Las Mariposas, or the Butterflies, who fought to liberate the Dominican Republic from Rafael Trujillo's dictatorship, featuring a new foreword by Maxine Hong Kingston

It is November 25, 1960, and three sisters have been found near their wrecked Jeep at the bottom of a 150-foot cliff on the north coast of the Dominican Republic. The official state newspaper reports their deaths as accidental. It does not mention that a fourth sister lives. Nor does it explain that the sisters were among the leading opponents of the dictatorship of General Rafael Leónidas Trujillo. It doesn’t have to. Everybody knows of Las Mariposas--the Butterflies.

In this extraordinary novel, the voices of all four sisters--Minerva, Patria, María Teresa, and the survivor, Dedé--speak across the decades to tell their own stories, from secret crushes to gunrunning, and to describe the everyday horrors of life under Trujillo’s rule. Through the art and magic of Julia Alvarez’s storytelling, the martyred Butterflies live again in this novel of courage, love, and the human cost of political oppression.

Penguin Vitae—loosely translated as "Penguin of one's life"—is a deluxe hardcover series from Penguin Classics celebrating a dynamic and diverse landscape of classic fiction and nonfiction from seventy-five years of classics publishing. Penguin Vitae provides readers with beautifully designed classics that have shaped the course of their lives, and welcomes new readers to discover these literary gifts of personal inspiration, intellectual engagement, and creative originality.

Julia Alvarez left the Dominican Republic for the United States in 1960, at the age of ten. She is the author of numerous works of fiction, nonfiction, and poetry, including her beloved first novel, How the García Girls Lost Their Accents. She has received the Latina Leader Award in Literature from the Congressional Hispanic Caucus Institute and the Hispanic Heritage Award in Literature; was named Woman of the Year by Latina magazine; and was awarded the National Medal of Arts by President Obama. She lives in Vermont.

Maxine Hong Kingston (foreword) is the author of The Woman Warrior, China Men, and Tripmaster Monkey, among other works. She is the recipient of numerous awards, including the National Book Award, the National Book Critics Circle Award, the presidentially conferred National Humanities Medal and National Medal of Arts, and the Medal for Distinguished Contribution to American Letters from the National Book Foundation. For many years a senior lecturer in creative writing at the University of California, Berkeley, she lives in Oakland, California.

“A gorgeous and sensitive novel.” —People

“A magnificent treasure for all cultures and all time.” ―St. Petersburg Times

“A fascinating and powerful picture of a family and a nation’s history.” ―The Dallas Morning News

“A poignant tale of courage and hope . . . As much an inspiration as it is a tragedy.” —Ms.

“A poignant tale of courage and hope . . . As much an inspiration as it is a tragedy.” ―Ms.

“A smashing follow-up to . . . How the García Girls Lost Their Accents . . . Speak[s] across the years as convincingly as Anne Frank did in her diary.” ―Glamour

“The real test of art, Leo Tolstoy said, is that it unite people. . . . [Alvarez] succeeds splendidly.” ―The Washington Post

“Alvarez has taken us somewhere we’ve never been . . . and moved us in ways we did not expect.” ―The San Diego Union-Tribune

“Succeeds magnificently . . . Alvarez’s translation of historical events into fiction achieves, in this fine book, the nuance and irony of truth.” ―The Christian Science Monitor

“Stunning . . . A book that confirms Alvarez . . . as a writer of imagination, grace and power, a Latin American storyteller whose voice we need to hear.” ―The Philadelphia Inquirer

“Rich in historical detail and immensely, hauntingly lyrical . . . As lovely as a butterfly at rest, and as moving as one in flight.” ―Burlington Free Press

“Breathtaking . . . Alvarez is one of our national literary treasures.” ―The Oregonian

“A wondrous work . . . both grand and intimate . . . Breathtaking . . . Magical . . . Certain to find its place in the classics of contemporary literature.” ―The Jackson Clarion-Ledger

“Masterful . . . This work, one of the finest of its genre, is a joy to read and a fitting tribute to its subjects.” ―MultiCultural Review

“A paean to the power of female courage . . . As mesmerizing as the Mirabal sisters themselves.” ―Kirkus Reviews, starred review

“I was moved to tears, not of sadness but of joy. The sisters Mirabal continue to live as long as women like Julia Alvarez are brave enough to tell their story.” ―Sandra Cisneros, author of The House on Mango Street

“It is destined to take its place on the shelf of the great Latin American novels.” ―Rudolfo Anaya, author of Bless Me, Ultima