Jenni Rivera: The Incredible Story of a Warrior Butterfly (Paperback) 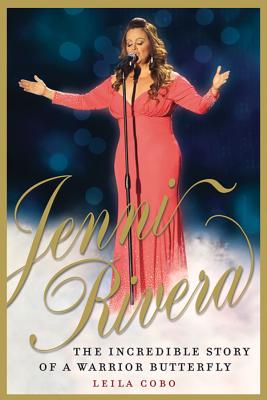 By Leila Cobo
$16.95
Possibly out of print. Email or call to check availability and price.

LIKE A BLAZING SHOOTING STAR, JENNI RIVERA LIT UP THE LIVES OF MILLIONS OF PEOPLE, YET THE SKY SWEPT HER AWAY BEFORE HER TIME

Jenni Rivera: The Incredible Life of a Warrior Butterfly:

Jenni Rivera was the top-selling artist within the Regional Mexican music genre. With a weekly radio show, her own reality show, a makeup and clothing line, and her own foundation, she was at the height of her career and life. Everything she had conquered, with blood, sweat, tears, and smiles, hap¬pened, as she said, with God leading her by the hand. However her life, her dreams, and the joy she shared with so many came to a tragic end just before dawn on December 9, 2012.

In Jenni Rivera: The Incredible Story of a Warrior Butterfly, Leila Cobo—pianist, TV host, and Executive Director for Latino content and programming at Billboard—brings us Jenni Rivera’s intimate and moving biography, reflecting on the party girl, the elegant woman, the great diva, the friend, the mother, and the grandmother. Discover the humble beginnings of Jenni’s life and career, as well as the emotional and sometimes turbulent moments that defined her persona and spirit. Like a candle blown out before her time, we not only lost the “Unforgettable One,” the “Queen of Queens,” the “Warrior Butterfly,” we also lost a brave woman who fearlessly faced life’s ups and downs to attain the happiness she so fervently wanted for herself and her family. With Jenni’s departure, we celebrate a shining legacy that will forever reverberate within every note of her voice.

A Fulbright scholar from Cali, Colombia, Leila Cobo is a novelist, pianist, TV host  and executive Editor for Latin Content and Programming for Billboard. Under her tenure, Billboard has expanded its coverage of Latin Music and for the first time in its more than 100-year history, the magazine has a complete weekly section dedicated solely to Latin music. Ms. Cobo also programs the yearly Billboard Latin Music Conference, the largest gathering of the Latin music industry in the U.S., and hosts its renown exclusive “Q&A’s” with Latin music’s biggest stars, which have included Ricky Martin, Jenni Rivera, Marc Anthony and Enrique Iglesias. Under her leadership, Billboard also launched its Spanish language website, Billboardenespanol.com.

As an author Ms. Cobo’s first novel, Tell Me Something True, was published Oct. 1 to critical acclaim by Grand Central Publishing/Hatchette and is now in its third printing. Her second novel, The Second Time We Met, was published in 2012.

Ms. Cobo is also host and executive producer of “Estudio Billboard,” the acclaimed TV show that airs weekly on the V-Me and internationally on Fox Life,  featuring in-depth interviews with artists like Juanes, Maná, Juan Luis Guerra and Gloria Estefan among many others.

Ms. Cobo is considered one of the country’s leading experts in Latin music and is regularly interviewed and consulted by news outlets around the world. She was named one of the most influential people in Latin music in publications such as Gatopardo, Revista Fuchsia and Ocean Drive Magazine, which named her one of its “Power Brokers” in 2008.  She also won the Nielsen President’s Award for Excellence and in 2007, she was the recipient of the journalistic excellence award from Premios Orquidea, which honors Colombians abroad.

Ms. Cobo holds dual bachelor degrees in journalism (from Bogota’s Universidad Javeriana) and in piano performance (from Manhattan School of Music in New York).  She concertized extensively before getting her master’s degree in Communication management from the Annenberg School of Communications at the University of Southern California.

Prior to Billboard, Leila wrote for the Los Angeles Times and was later the pop music critic at the Miami Herald. She’s written liner notes for Ricky Martin, Shakira, Julio Iglesias and Selena among others, and collaborates closely with Grammy in the Schools and Teach for America, among other projects.

Ms. Cobo is also one of the authors of the Billboard Illustrated Encyclopedia of Music and a guest writer on the anthology Quinceañera.