Something Incredibly Wonderful Happens: Frank Oppenheimer and the world he made up (Hardcover) 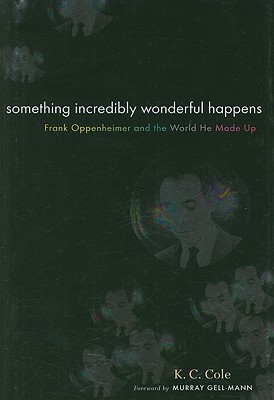 As a young man Frank Oppenheimer followed in his famous brother’s footsteps—growing up in a privileged Manhattan household, becoming a physicist, working on the atomic bomb. Tragically, Frank and Robert both had their careers destroyed by the Red Scare. But their paths diverged. While Robert died an almost ruined man, Frank came into his own, emerging from ten years of exile on a Colorado ranch to create not just a multimillion dollar institution but also a revolution that was felt all over the world. His Exploratorium was a "museum of human awareness" that combined art and science while it encouraged play, experimentation, and a sense of joy and wonder; its success inspired a transformation in museums around the globe. In many ways it was Frank’s answer to the atom bomb. K. C. Cole—a friend and colleague of Frank’s for many years—has drawn from letters, documents, and extensive interviews to write a very personal story of the man whose irrepressible spirit would inspire so many.

A popular science columnist for the Los Angeles Times and teacher at UCLA, K.C. Cole is a recipient of the 1995 American Institute of Physics Award for Best Science Writing. She is also the author of the internationally bestselling The Universe and the Teacup, First You Build a Cloud, and The Hole in the Universe. Cole lives in Santa Monica, California.

Praise for MIND OVER MATTER:

"Ruminations on every scientific subject under the sun, and plenty beyond it ... In pithy, three-page bursts, [Cole] tackles particle physics, geometry, Alfred Nobel, and about a thousand other topics, all with graceful, accessible prose." --The Boston Globe (Sunday)

"An absolute delight ... Belongs on the bedside bookshelf of every science enthusiast and should also be a treat for any reader curious about the universe." --San Jose Mercury-News