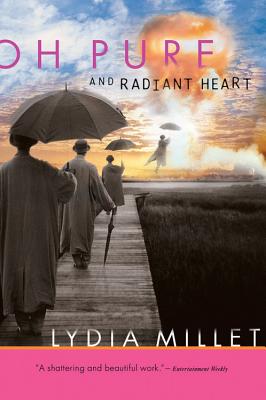 Oppenheimer's first full day at the motel was devoted to television. He located the remote on the bedside table, where it sat beside the enigmatic telephone with its sheet of intricate numeric instructions, and eventually by pressing the button marked power discovered its function. -from OH PURE AND RADIANT HEART

In Oh Pure and Radiant Heart, the three dead geniuses who invented the atomic bomb-Robert Oppenheimer, Leo Szilard, and Enrico Fermi-mysteriously appear in Sante Fe, New Mexico, in 2003, nearly sixty years after they watched history's first mushroom cloud rise over the New Mexico desert in 1945. One by one, they are discovered by a shy librarian, who takes them in and devotes herself to them.

Faced with the evidence of their nuclear legacy, the scientists embark on a global disarmament campaign that takes them from Hiroshima to Nevada to the United Nations. Along the way, they acquire a billionaire pothead benefactor and a growing convoy of RVs carrying groupies, drifters, activists, former Deadheads, New Age freeloaders, and religious fanatics.

In this heroically mischievous, sweeping tour de force, Lydia Millet brings us an apocalyptic fable that marries the personal to the political, confronts the longing for immortality with the desire for redemption, and evokes both the beauty and the tragedy of the nuclear sublime.

LYDIA MILLET is the author of several previous novels, including Everyone's Pretty and My Happy Life, which won the 2003 PEN Center USA Award for Fiction. She lives in the desert outside Tucson, Arizona.

“Though Oh Pure and Radiant Heart possesses the nervy irreverence of Kurt Vonnegut and Joseph Heller, Millet makes the subject matter her own, capturing the essence of these geniuses in a way that can only be described as, well, genius.”--Vanity Fair

"In her brilliant and fearless novel . . . Lydia Millet takes a headlong run at the subject of nuclear annihilation, weaving together black comedy, science, history, and time travel to produce, against stiff odds, a shattering and beautiful work. A-."--Entertainment Weekly
—