A Country Called Prison: Mass Incarceration and the Making of a New Nation (Hardcover) 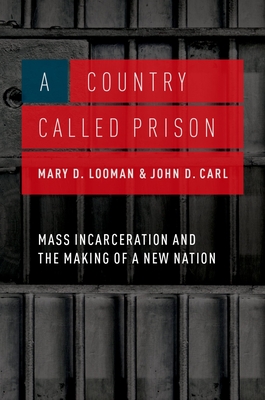 The United States is the world leader in incarcerating citizens. 707 people out of every 100,000 are imprisoned. If those currently incarcerated in the US prison system were a country, it would be the 102nd most populated nation in the world. Aside from looking at the numbers, if we could look
at prison from a new viewpoint, as its own country rather than an institution made up of walls and wires, policies and procedures, and legal statutes, what might we be able to learn? In A Country Called Prison, Mary Looman and John Carl propose a paradigm shift in the way that American society views mass incarceration. Weaving together sociological and psychological principles, theories of political reform, and real-life stories from experiences working in prison and with
at-risk families, Looman and Carl form a foundation of understanding to demonstrate that prison is more than an institution built of fences and policies - it is a culture. Prison continues well after incarceration, as ex-felons leave correctional facilities (and often return to impoverished
neighborhoods) without money or legal identification of American citizenship. Trapped in the isolation of poverty, these legal aliens turn to illegal ways of providing for themselves and are often reimprisoned. This situation is unsustainable and America is clearly facing an incarceration epidemic
that requires a new perspective to eradicate it. A Country Called Prison offers concrete, feasible, economical suggestions to reform the prison system and help prisoners return to a healthier life after incarceration.

Mary D. Looman is a Psychologist for the Oklahoma Department of Corrections and an adjunct professor at the University of Oklahoma with over 30 years of experience working in criminal justice and social service organizations. John D. Carl is an Assistant Professor, Department of Sociology, at the University of Oklahoma with 20 years of experience in social work and teaching college courses in criminology.