News from Moscow: Soviet Journalism and the Limits of Postwar Reform (Hardcover) 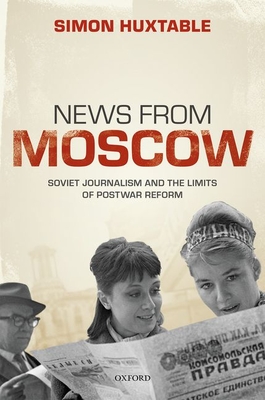 By Simon Huxtable
$100.00
Possibly out of print. Email or call to check availability and price.

News from Moscow is a social and cultural history of Soviet journalism after World War II. Focusing on the youth newspaper Komsomol'skaia Pravda, the study draws on transcripts of behind-the-scenes editorial meetings to chart the changing professional ethos of the Soviet journalist. Simon
Huxtable shows how journalists viewed themselves both as propagandists bringing the Party's ideas to the wider public, but also as reformers who tried to implement new ideas that would help usher the country towards Communism. The volume focuses on both aspects of the journalists' role, from
propaganda editorials in praise of Comrade Stalin and articles lauding young heroes' exploits in the Virgin Lands, to revolutionary new initiatives, such as the country's first ever polling institute and clubs promoting the virtues of unfettered public debate. Soviet journalism, argues Huxtable, was
riven with an unresolvable tension between innovation and conservativism: the more journalists tried to promote new innovations to perfect Soviet society, the more officials grew anxious about the disruptive consequences of reform. By demonstrating the day-to-day conflicts that characterised the
press's activity, and by showing that the production of Soviet propaganda involved much more than redrafting orders from above, News from Moscow offers a new perspective on Soviet propaganda that expands our understanding of the possibilities and limits of reform in a period of rapid change.

Simon Huxtable, Lecturer in Modern European History, Birkbeck College Simon Huxtable is Lecturer in Modern European History at Birkbeck, University of London. His work focuses on the history of the Soviet Union, with a particular focus on mass media. He is the co-author, with Sabina Mihelj, of From Media Systems to Media Cultures: Understanding Socialist Television(2018) and has published a number of journal articles and book chapters on the history of the press and television in the Soviet Union and Eastern Europe.