Ghosts of the Confederacy: Defeat, the Lost Cause, and the Emergence of the New South, 1865 to 1913 (Paperback) 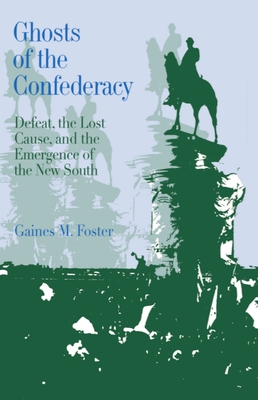 By Gaines M. Foster
Email or call for price.
Not in stock. Available To Order.

After Lee and Grant met at Appomatox Court House in 1865 to sign the document ending the long and bloody Civil War, the South at last had to face defeat as the dream of a Confederate nation melted into the Lost Cause. Through an examination of memoirs, personal papers, and postwar Confederate rituals such as memorial day observances, monument unveilings, and veterans' reunions, Ghosts of the Confederacy probes into how white southerners adjusted to and interpreted their defeat and explores the cultural implications of a central event in American history. Foster argues that, contrary to southern folklore, southerners actually accepted their loss, rapidly embraced both reunion and a New South, and helped to foster sectional reconciliation and an emerging social order. He traces southerners' fascination with the Lost Cause--showing that it was rooted as much in social tensions resulting from rapid change as it was in the legacy of defeat--and demonstrates that the public celebration of the war helped to make the South a deferential and conservative society. Although the ghosts of the Confederacy still haunted the New South, Foster concludes that they did little to shape behavior in it--white southerners, in celebrating the war, ultimately trivialized its memory, reduced its cultural power, and failed to derive any special wisdom from defeat.