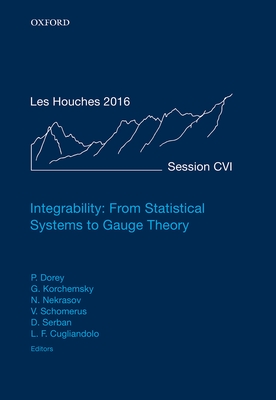 This volume, 106 of the Les Houches Summer School series, brings together applications of integrability to supersymmetric gauge and string theory. The book focuses on the application of integrability and problems in quantum field theory. Particular emphasis is given to the exact solution of planar N=4 super-Yang-Mills theory and its relation with string theory on the one hand, and the exact determination of the low-energy physics of N=2
super-Yang-Mills theories on the other; links with other domains are also explored. The purpose of the Les Houches Summer School was to bring together young researchers and specialists from statistical physics, condensed matter physics, gauge and string theory, and mathematics, to stimulate discussion across these different research areas.

Patrick Dorey, Professor, Department of Mathematical Sciences, Durham University, Gregory Korchemsky, Senior researcher, Centre national de la recherche scientifique (CNRS), Nikita Nekrasov, Professor, Stony Brook University, Volker Schomerus, Head of DESY Theory Group, University of Hamburg, DidinaSerban, Senior researcher, Institut de Physique Theorique Saclay, Leticia Cugliandolo, Professor at Sorbonnes Universites, Universite Pierre et Marie Curie Patrick Dorey studied in Cambridge and Durham in the UK. He completed postdocs in Paris and CERN, before returning to Durham as a lecturer. His main research activity has been into exactly-solvable, or integrable, quantum field theories in 1+1 dimensions. Gregory Korchemsky studied in Russia, in Rostov-on-Don and in Dubna. After postdocs in Parma and Stony Brook, he came to France as a CNRS researcher, first in Orsay and then in Saclay. His main research activity has been into integrability in gauge and string theory. Nikita Nekrasov studied in Moscow and defended his PhD dissertation at Princeton University in 1996. He was a Junior fellow at Harvard, then permanent professor at the Institut des Hautes Etudes Scientifiques in France. Since 2013 he is a professor at the Simons Center for Geometry and Physics. Heis known for his work on supersymmetric gauge theory and string theory: the Nekrasov partition function relates instantons in gauge theory, integrable systems and representation theory of infinite dimensional algebras. Volker Schomerus holds a joint position as a Senior Researcher in the DESY Theory Group, and a Professor of Mathematical Physics at Universitat Hamburg. His work focuses on string theory at the interface to high energy physics, mathematics and statistical physics, for which he has received severaldistinctions, including the Guy-Lussac-Humboldt award in 2010. Didina Serban studied in Romania then in France, where she prepared her PhD in Theoretical Physics at the Service de Physique Theorique de Saclay. After a post-doctoral stay at the University of Cologne she joined, in 1998, the Service de Physique Theorique as a permanent researcher. The focus ofher research is on exactly solvable models and the use of symmetries, with applications in condensed matter physics like magnetic one-dimensional models, Quantum Hall effect or phase transition in low-dimensional disordered systems. More recently, her research deals with exactly solvable gaugetheories and their dualities to string theories.