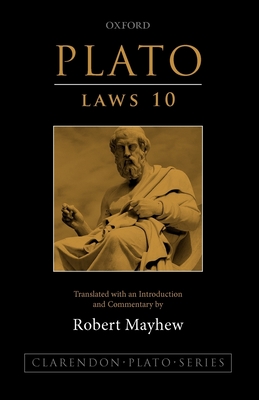 The Laws is Plato's last and longest dialogue. Although it has been neglected (compared to such works as the Republic and Symposium), it is beginning to receive a great deal of scholarly attention. Book 10 of the Laws contains Plato's fullest defence of the existence of the gods, and his last
word on their nature, as well as a presentation and defence of laws against impiety (e.g. atheism). Plato's primary aim is to defend the idea that the gods exist and that they are good - this latter meaning that they do not neglect human beings and cannot be swayed by prayers and sacrifices to
overlook injustice. As such, the Laws is an important text for anyone interested in ancient Greek religion, philosophy, and politics generally, and the later thought of Plato in particular.
Robert Mayhew presents a new translation, with commentary, of Book X of the Laws. His primary aim in the translation is fidelity to the Greek. His commentary focuses on philosophical issues (broadly understood to include religion and politics), and deals with philological matters only when doing so
serves to better explain those issues. Knowledge of Greek is not assumed, and the Greek that does appear has been transliterated. It is the first commentary in English of any kind on Laws X for nearly 140 years.