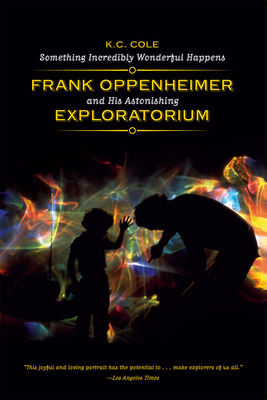 By K. C. Cole, Murray Gell-Man (Foreword by)
Email or call for price

How do we reclaim our innate enchantment with the world? And how can we turn our natural curiosity into a deep, abiding love for knowledge? Frank Oppenheimer, the younger brother of the physicist J. Robert Oppenheimer, was captivated by these questions, and used his own intellectual inquisitiveness to found the Exploratorium, a powerfully influential museum of human awareness in San Francisco, that encourages play, creativity, and discovery—all in the name of understanding. In this elegant biography, K. C. Cole investigates the man behind the museum with sharp insight and deep sympathy. The Oppenheimers were a family with great wealth and education, and Frank, like his older brother, pursued a career in physics. But while Robert was unceasingly ambitious, and eventually came to be known for his work on the atomic bomb, Frank’s path as a scientist was much less conventional. His brief fling with the Communist Party cost him his position at the University of Minnesota, and he subsequently spent a decade ranching in Colorado before returning to teaching. Once back in the lab, however, Frank found himself moved to create something to make the world meaningful after the bombing of Hiroshima and Nagasaki. He was inspired by European science museums, and he developed a dream of teaching Americans about science through participatory museums. Thus was born the magical world of the Exploratorium, forever revolutionizing not only the way we experience museums, but also science education for years to come. Cole has brought this charismatic and dynamic figure to life with vibrant prose and rich insight into Oppenheimer as both a scientist and an individual.

K. C. Cole is a science writer for the Los Angeles Times, professor at the Annenberg School of Journalism at the University of Southern California, and the author of many books, including The Hole in the Universe.

“Something incredibly wonderful will happen when you open this book. You’ll come face to face with a man who had an uncanny knack for making the wonders of nature available to the rest of us, and you’ll get to look inside his extraordinary mind, which itself was one of the wonders of nature. As always, K. C. Cole delivers science to us as a thrilling ride, a deeply human story, and a gallery of unimaginable beauty.”
— Alan Alda

“By shunning a traditional biographical tapestry, Cole successfully, and at times movingly, limits her focus to Frank's infectious passion for science."
— Nature

“Like one of Oppenheimer’s science classes or a visit to the Exploratorium, this joyful and loving portrait has the potential to change minds and make explorers of us all.”
— Los Angeles Times

“It is unlikely that anyone will ever write a more perceptive biography of Frank Oppenheimer."