Nightmares in the Dream Sanctuary: War and the Animated Film (Hardcover) 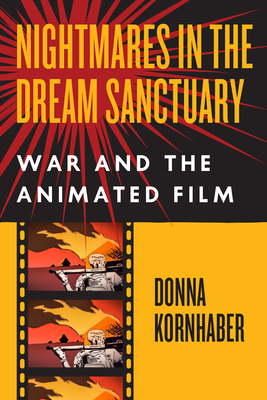 In 2008, Waltz with Bashir shocked the world by presenting a bracing story of war in what seemed like the most unlikely of formats—an animated film.  Yet as Donna Kornhaber shows in this pioneering new book, the relationship between animation and war is actually as old as film itself.  The world’s very first animated movie was made to solicit donations for the Second Boer War, and even Walt Disney sent his earliest creations off to fight on gruesome animated battlefields drawn from his First World War experience.  As Kornhaber strikingly demonstrates, the tradition of wartime animation, long ignored by scholars and film buffs alike, is one of the world’s richest archives of wartime memory and witness.

Generation after generation, artists have turned to this most fantastical of mediums to capture real-life horrors they can express in no other way.  From Chinese animators depicting the Japanese invasion of Shanghai to Bosnian animators portraying the siege of Sarajevo, from African animators documenting ethnic cleansing to South American animators reflecting on torture and civil war, from Vietnam-era protest films to the films of the French Resistance, from firsthand memories of Hiroshima to the haunting work of Holocaust survivors, the animated medium has for more than a century served as a visual repository for some of the darkest chapters in human history.  It is a tradition that continues even to this day, in animated shorts made by Russian dissidents decrying the fighting in Ukraine, American soldiers returning from Iraq, or Middle Eastern artists commenting on the Israeli-Palestinian conflict, the Arab Spring, or the ongoing crisis in Yemen.

Nightmares in the Dream Sanctuary: War and the Animated Film vividly tells the story of these works and many others, covering the full history of animated film and spanning the entire globe.  A rich, serious, and deeply felt work of groundbreaking media history, it is also an emotional testament to the power of art to capture the endurance of the human spirit in the face of atrocity.

Donna Kornhaber is associate professor of English at the University of Texas at Austin.  She is the author of Wes Anderson: A Collector’s Cinema and Charlie Chaplin, Director.

"Nightmares in the Dream Sanctuary is an accomplished, well-supported exploration of the intersectional relationships between animated film, the construction of public memory, and some of the moral and practical issues that accompany acts of filmic commemoration. While the theoretical framing of the book provides innovative and thought-provoking methods for exploring films, it is the volume’s focus on several understudied and overlooked films that serves as an additional key strength of this title. . . . the book makes an erudite contribution to the wider fields of film studies, trauma theory, and the literature of war, while simultaneously appealing to contemporary audiences with a broad interest in the ideological and sociohistorical contexts of animated film and its relation to collective affect."
— Journal of Popular Culture

"In this substantial work, Kornhaber looks at how animated films, both feature length and short, have treated war—its causes and its consequences—revealing a shocking, poignant, and surprising history of inhumanity. . . . Kornhaber provides an insightful analysis of the invisible and unthinkable aspects of global warfare, from Czechoslovakia to China. . . .  [She] shows the power of animation to reorder the world and expose human cruelty and idiocy."
— Choice, Outstanding Academic Title in Cinema Studies 2020

"A monumental project. . . . One of the most useful things about this book is the care it takes to contextualize the historical and cultural specificities of each film alongside a detailed analysis of its aesthetics. In so doing, Nightmares in the Dream Sanctuary becomes an invaluable contribution to animation studies."
— Film Quarterly

“Nightmares in the Dream Sanctuary demonstrates tremendous knowledge, and it is truly surprising to discover just how many animated war films there are, given that only a handful, such as Waltz with Bashir and Persepolis, are internationally known."
— Times Higher Education

"A valuable contribution to an overlooked aspect of cinematic history."
— The Spectator

"Extraordinarily engaging, psychologically penetrating, and intellectually absorbing. In short, this is a new classic of topical film studies and the literature of art and war."
— Booklist

"Kornhaber is intrigued by the ways in which film can be used to tell outrageous lies about the acceptability of war, or to confront viewers with unwelcome truths about its costs, but also in which animation, in its plastic relation to reality, can prove ideally suited for depicting a world turned upside-down."
— All the Anime

“Nightmares in the Dream Sanctuary: War and the Animated Film is a hugely valuable survey that reveals how animation is a resource for resistance, protest, and memorialization of war.  Crucially, its framework is global, from Korea to Kenya, from Russia to Chile, from Bosnia to Syria.  One encounters compelling interpretations of acclaimed feature films such as Israel’s Waltz with Bashir and Japan’s Grave of the Fireflies, along with fascinating histories and analyses of short form and experimental work spanning many, many countries and traditions. This cultural history, covering over one hundred years, sets itself apart by its deep knowledge, range, breadth.  There is much to be learned from this study.”
— Hillary Chute, author of Why Comics? From Underground to Everywhere and Disaster Drawn: Visual Witness, Comics, and Documentary Form

“This is a genuinely moving and deeply insightful book on what turns out to be the very long history of war and atrocity in animated films. With equal attention to the aesthetics, stories, and contexts of a global range of work, Kornhaber has excavated the melancholic (when not actually heartbreaking) saga of an imaginative medium grappling with the complexities of the unimaginable. She is a hugely sensitive writer while still remaining clear-eyed and analytical. This book is an immense contribution to the field of animation studies and well beyond.”
— Scott R. Bukatman, Stanford University

"With Nightmares in the Dream Sanctuary, Kornhaber offers a unique encounter of how to critically approach different types of animated war films. She addresses complex philosophical questions related to war and skillfully links them to tangible animated films. . . . A solid, accessible, and well-balanced volume."