The Art of Return: The Sixties and Contemporary Culture (Hardcover) 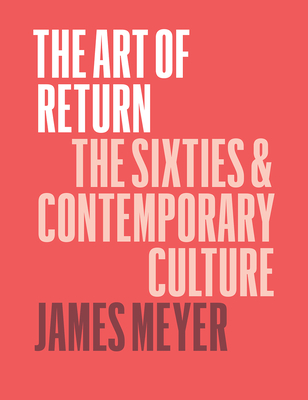 By James Meyer
$45.00
Possibly out of print. Email or call to check availability and price.

More than any other decade, the sixties capture our collective cultural imagination. And while many Americans can immediately imagine the sound of Martin Luther King Jr. declaring “I have a dream!” or envision hippies placing flowers in gun barrels, the revolutionary sixties resonates around the world: China’s communist government inaugurated a new cultural era, African nations won independence from colonial rule, and students across Europe took to the streets, calling for an end to capitalism, imperialism, and the Vietnam War.

In this innovative work, James Meyer turns to art criticism, theory, memoir, and fiction to examine the fascination with the long sixties and contemporary expressions of these cultural memories across the globe. Meyer draws on a diverse range of cultural objects that reimagine this revolutionary era stretching from the 1950s to the 1970s, including reenactments of civil rights, antiwar, and feminist marches, paintings, sculptures, photographs, novels, and films. Many of these works were created by artists and writers born during the long Sixties who were driven to understand a monumental era that they missed. These cases show us that the past becomes significant only in relation to our present, and our remembered history never perfectly replicates time past. This, Meyer argues, is precisely what makes our contemporary attachment to the past so important: it provides us a critical opportunity to examine our own relationship to history, memory, and nostalgia.

James Meyer is a curator of Modern Art at the National Gallery of Art in Washington, DC. He was previously the Winship Distinguished Research Associate Professor of Art History at Emory University and deputy director and chief curator of the Dia Art Foundation.

"Blending criticism, memoir, and theory, the author explores the enduring influence of the sixties on art today. Analyzing works such as An-My Lê’s photos of Vietnam military reënactments, Kerry James Marshall’s enigmatic elegies to slain heroes of the civil-rights movement, and reimaginings by more than one artist of Robert Smithson’s evanescent earthworks, Meyer notes the tendency both to interrogate the dreamy impulses of the 'good Sixties'—'the last period of world revolution'—and to reflect the entropy, trauma, and war of the 'bad Sixties.' Many of the artists here, and Meyer himself, feel that they just missed out on something big: as children in the sixties, they were 'imprinted with the imagery of a momentous period they barely glimpsed.'"
— The New Yorker

"In this extraordinarily ambitious work, Meyer . . . examines 'a broad cohort of artists, filmmakers, writers and academics' whose works reflect their continued fascination with the era. . . . this book will challenge readers who seek a deeper explanation for the persistence of the sixties in American life. . . . Summing Up: Recommended."
— CHOICE

"Meyer shows nuance in distinguishing between the historical ’60s and what our present cultural imagination has made of the decade . . . . The Art of Return is written primarily as an overview of postmodern art from roughly the last thirty years. Meyer provides extensive readings of works by a diverse number of artists—in the media of photography, the novel, painting, film, and installation art—all of whom reenvision, in one way or another, the afterlives of the ’60s against our contemporary backdrop."
— Public Books

"The Art of Return: The Sixties & Contemporary Culture offers a thoughtful account of how art and history inform each other, even in postmodern art. Meyer examines a generation of artists—his own—who use their work to remember the 1960s. They were only children during Camelot and Civil Rights and the Summer of Love, and later felt they'd missed out on a revolutionary time. Like 19th century Romantics born too late for Napoleon becoming obsessed with his memory, these 'Sixties children' live with a 'gnawing sense of belatedness' driving them 'to take charge of the history we did not experience; it goads us to understand what happened—to reconstruct, reimagine, and retell.'"
— The Washington Free Beacon

"Wonderful . . . . Meyer succinctly demonstrates and cunningly illustrates how the ghost of then informs so much of what we do, think and invent today, art and otherwise."
— Winemag.co.za

"Meyer's The Art of Return is a hybrid of genres: autobiography, art criticism and non-fiction. He follows two parallel trajectories, one being his personal memories of the 1960s – from hitchhiking adventures in childhood to his traumatic experience of J. F. Kennedy's assassination, to his more recent trip to the campus of Kent State University – and the other a socio-historical account of that era, a combination that makes the book fun to read. These mnemonic and chronological lines exist parallel to one another but intersect from time to time."
— Art History

“No one lives by decades—no one looked up on December 31, 1969, and said, ‘Oh, no! It’s almost over!’—and yet the Sixties, like the Dude, abides. It functions variously as fetish, lucky charm, standard, or whip—chaos and confusion, destruction and the devil’s own playground to some, a time of hot desire and extravagant dreams that ignited the fuses of possibility for others. The best of times and the worst of times. Meyer dives into that maelstrom with passion, courage, and clarifying intelligence. He emerges with a striking and sensitive portrait of that time, and of our own time, that moves beyond myth and symbol and into the heart of life as it’s actually lived—contradictory, unfinished, trembling, and real.”
— Bill Ayers, author of Fugitive Days: A Memoir and Public Enemy: Confessions of an American Dissident

“Meyer is a critic and art historian of extraordinary rigor and insight, and there are few who are better equipped to write on the ‘long’ Sixties. The Art of Return is a striking and generous reflection on that moment’s effect as reimagined by artists, writers, filmmakers, and art historians. Meyer is to be especially commended for his capacious analyses of histories too often marginalized in art-historical treatments of the long Sixties and the connections he draws in taking a more global view of art history.”
— Pamela Lee, author of New Games: Postmodernism after Contemporary Art

“In this marvelously original, insightful, and timely book, Meyer draws from the work of artists and theoreticians who have helped to shape late-modern and contemporary art and effectively folds the legacies of the 1960s onto current artistic practices and concerns. Written with a literary flair and urgency that is at times breathtaking, the author’s impassioned arguments, dialogues, and reinterpretations are at once inherently allusive and personal, and yet utterly convincing in the way they address questions that go to the heart of artistic production today.”
— Alexander Alberro, author of Abstraction in Reverse