RISINGTIDEFALLINGSTAR: In Search of the Soul of the Sea (Paperback) 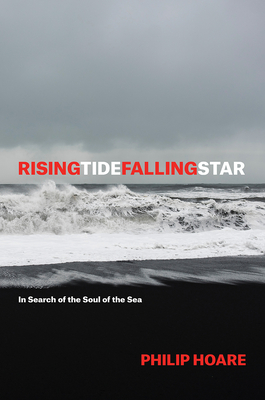 “Every day is an anxiety in my ways of getting to the water. . . . I’ve become so attuned to it, so scared of it, so in love with it that sometimes I can only think by the sea. It is the only place I feel at home.”

Many of us visit the sea. Admire it. Even profess to love it. But very few of us live it. Philip Hoare does. He swims in the sea every day, either off the coast of his native Southampton or his adopted Cape Cod. He watches its daily and seasonal changes. He collects and communes with the wrack—both dead and never living—that it throws up on the shingle. He thinks with, at, through the sea.

All of which should prepare readers: RISINGTIDEFALLINGSTAR is no ordinary book. It mounts no straight-ahead argument. It hews to no single genre. Instead, like the sea itself, it moves, flows, absorbs, transforms. In its pages we find passages of beautiful nature and travel writing, lyrical memoir, seams of American and English history and much more. We find Thoreau and Melville, Bowie and Byron, John Waters and Virginia Woolf, all linked through a certain refusal to be contained, to be strictly defined—an openness to discovery and change. Running throughout is an air of elegy, a reminder that the sea is an ending, a repository of lost ships, lost people, lost ways of being. It is where we came from; for Hoare, it is where he is going.

“Every swim is a little death,” Hoare writes, “but it is also a reminder that you are alive.” Few books have ever made that knife’s edge so palpable. Read RISINGTIDEFALLINGSTAR. Let it settle into the seabed of your soul. You’ll never forget it.

Philip Hoare is the author of seven books of nonfiction, including The Sea Inside, The Whale, and biographies of Noel Coward and Stephen Tennant. He lives in Southampton and on Cape Cod.

"There is romance in [Hoare's] art, but it is never sentimental. On the contrary, he is reforging a primitive bond, paying attention to the natural world with compassion and curiosity. This is a truly mesmerizing read, its writer so very human but clearly wishing to be a part of nature rather than society."
— Wall Street Journal, year's best nature books

"RisingTideFallingStar is so well written, so impassioned, so aqua-obsessed that after reading it you may actually want to drown."

"This is a book that is at once nature writing, memoir, literary criticism, travelogue and elegy. Like Sebald, the glue that binds it together is the narrative voice, a lonely, antique, erudite voice that speaks in long sentences studded with semi-colons; something liquid, tidal about the surge and flow of the words. . . . The passages that burn brightest here in the reader's mind are those in which the author turns his focus fully on his own life amid the waves. . . . Rarely have I read a book that felt as if it were speaking so directly, so confidentially to me. RisingTideFallingStar is about books and about swimming, but most of all it does what all great books do: makes you feel that it’s a private conversation between you and the author. I finished it with an obscure feeling of privilege, to have been granted such access to Hoare's most secret, intimate self. . . . RisingTideFallingStar is a masterpiece."

["Philip Hoare's] writing is quite untrammeled by convention and opens up astonishing views at every turn."
— W. G. Sebald

"Rich and strange."
— Olivia Laing, author of The Lonely City

"Hoare is drawn more to mystery than to science, less to the known than the unknowable, to the amateur more than the professional, preferring to find those who stumble on the sea than those who devote their lives to it. . . . With the all-encompassing model of Moby-Dick behind it, Hoare presents a vast and billowing medley of marinaria, with a tumbling sequence of biographical sketches and autobiographical moments, a half-lyrical, half-narrative encyclopaedia in which everything and anyone can be contained like a bundling of gusts and siroccos shut for a moment into the bag of winds. . . . Hoare writes with a beautiful and liquid assurance, luxuriantly at home in this half-modernist, half-conventional medium and capable of astonishingly realised visions of floating moments and sea encounters. . . . There is a genius for empathy here."
— Adam Nicolson

"Reading Hoare is as strange, invigorating and disorienting as the experience of a sea swim."
— Telegraph