Midlife Crisis: The Feminist Origins of a Chauvinist Cliché (Paperback) 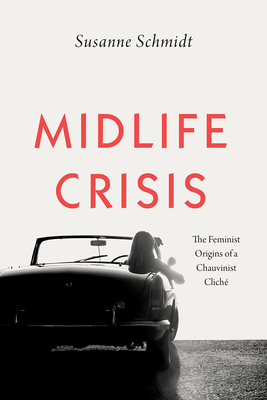 By Susanne Schmidt
Email or call for price

The phrase “midlife crisis” today conjures up images of male indulgence and irresponsibility—an affluent, middle-aged man speeding off in a red sports car with a woman half his age—but before it become a gendered cliché, it gained traction as a feminist concept. Journalist Gail Sheehy used the term to describe a midlife period when both men and women might reassess their choices and seek a change in life. Sheehy’s definition challenged the double standard of middle age—where aging is advantageous to men and detrimental to women—by viewing midlife as an opportunity rather than a crisis. Widely popular in the United States and internationally, the term was quickly appropriated by psychological and psychiatric experts and redefined as a male-centered, masculinist concept.

The first book-length history of this controversial concept, Susanne Schmidt’s Midlife Crisis recounts the surprising origin story of the midlife debate and traces its movement from popular culture into academia. Schmidt’s engaging narrative telling of the feminist construction—and ensuing antifeminist backlash—of the midlife crisis illuminates a lost legacy of feminist thought, shedding important new light on the history of gender and American social science in the 1970s and beyond.

Susanne Schmidt is a research associate and lecturer in history at Freie Universität Berlin.

"Midlife was once seen as a chance for women to reassert themselves. Then came an organized, misogynist backlash. . . . In her fascinating new book, the historian Susanne Schmidt reminds us that, not long ago, we did have an important debate about the changing life course."
— New Republic

"The concept of the midlife crisis developed against the backdrop of a deeply gendered scientific and cultural understanding of middle life. In her analysis of how this gendered standard came about, Schmidt's intersectional analysis is at its best. . . . Schmidt here interweaves the gendered, raced, and classed character not only of cultural norms but also of social and everyday realities. . . . She not only answers Janice Bohan's (1995) call to 're-place women in the history of psychology' but provides a paradigmatic example of how to put both feminism and popular culture back into psychology."
— Journal of the History of the Behavioral Sciences

"[A] clearly articulated, sharply written book. . . . Midlife Crisis is a fine contribution to debates about how meanings of midlife—and indeed health and well-being across the life course—in women and men were contingent and contested through the closing decades of the twentieth century. . . . Schmidt's analysis of the reactionary force of the academic establishment is astute as she draws out the gendered politics of contemporary studies of the life course and emphasises Sheehy’s claim to originality—rather than appropriation—in setting out the parameters of the midlife crisis. . . . An original—and welcome—addition to a growing literature on what Margaret Lock referred to in 1998 as 'the last portion of the life span to be discovered'."
— Social History of Medicine

"Taken as a whole, the book deftly captures the very social and conflictual nature of scientific discourse and the ongoing gender politics of aging. It makes an important contribution to bridging the discipline of psychology and popular culture and provides a useful framework for understanding contemporary debates about midlife, menopause, and aging. Finally, Midlife Crisis provides a serious investigation of an almost-forgotten journalist and a best-selling book that shaped a generation. . . . Recommended."
— Choice

"Schmidt studies knowledge in the making and provides a history of the midlife crisis that is empirically grounded, excellent, and elaborate."
— NTM Zeitschrift für Geschichte der Wissenschaften, Technik und Medizin

"In this exceptional new book, Schmidt utilizes popular and professional contests about aging and gender to illuminate central themes of feminism and politics. Midlife Crisis is essential reading not only for historians of recent American culture but for anyone eager to understand the framing of aging and development as gender roles are transformed."
— Allan M. Brandt, Harvard University

"Schmidt’s engaging history of the midlife crisis takes as a central theme the generative contributions of feminist voices in public conversations about science in the Cold War United States, raising questions about the midlife opportunities and challenges experienced by men and women in American society that feel as pertinent today as they did to Gail Sheehy’s readers in 1976. Schmidt deftly shows how an idea first articulated by a journalist wended its way into professional psychological discussions and has been with us ever since."
— Erika Lorraine Milam, author of Creatures of Cain: The Hunt for Human Nature in Cold War America

“The topic—which is of more than historical interest—has given Schmidt a window to look at the social and cultural history of the era and assess the impact of feminism on life cycle studies and vice versa. Her research in the popular literature and on the personalities and politics of publication and precedence are very interesting indeed and shed light on what was at stake for authors and readers of this time. Midlife Crisis fills a gap in the literature and addresses an issue that, as the author shows, is still with us.”
— Robert A. Nye, Oregon State University