Politics for Everybody: Reading Hannah Arendt in Uncertain Times (Paperback) 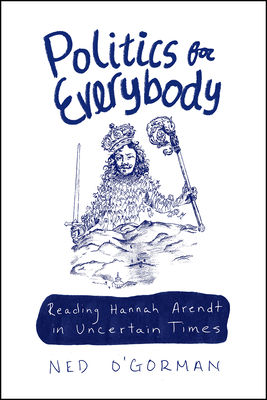 By Ned O'Gorman
Email or call for price.
Special Order - Subject to Availability

In this age of nearly unprecedented partisan rancor, you’d be forgiven for thinking we could all do with a smaller daily dose of politics. In his provocative and sharp book, however, Ned O’Gorman argues just the opposite: Politics for Everybody contends that what we really need to do is engage more deeply with politics, rather than chuck the whole thing out the window. In calling for a purer, more humanistic relationship with politics—one that does justice to the virtues of open, honest exchange—O’Gorman draws on the work of Hannah Arendt (1906–75). As a German-born Jewish thinker who fled the Nazis for the United States, Arendt set out to defend politics from its many detractors along several key lines: the challenge of separating genuine politics from distorted forms; the difficulty of appreciating politics for what it is; the problems of truth and judgment in politics; and the role of persuasion in politics. O’Gorman’s book offers an insightful introduction to Arendt’s ideas  for anyone who wants to think more carefully

Ned O’Gorman is professor of communication at University of Illinois at Urbana-Champaign.

"Animated not just by a theoretical and academic interest in Arendt’s work, but also by a practical intent to change the current manner of seeing politics and improve the quality of citizenship and freedom, as well as the daily art of living together. . . Written not only from the scholar’s but also from the citizen’s perspective and with the critical responsibility of the public intellectual for the values and culture of his society. . . . In a sense, the main message of O’Gorman’s book is that, if we are to properly rise to the challenges of the twenty-first century, in a world that is increasingly characterized by change and uncertainty and where strangers are, literally, at our doors, we need to relearn the art of living together, as strangers and across our differences, and of imagining and creating together “new, relatively stable political orders.""
— The Review of Politics

"An unusually learned and layered treatise on the current state of US democratic society. It deserves to be engaged widely—within rhetorical studies, alongside exemplary works on Arendt from scholars like Ronald Arnett, and in multiple scholarly and civic communities beyond. Indeed, O'Gorman's intellectual work in Politics for Everybody is dexterous yet broadly accessible, suited to a contemporary revival of interest in Arendt among academic as well as bestseller lists amid fears of democratic erosion and creeping authoritarianism."
— Quarterly Journal of Speech

“In Politics for Everybody, O’Gorman presents a concise and engaging argument for why political participation, leadership, and judgment are honorable and essential practices for a free society. His prose is clear and accessible, and at times truly eloquent. More than just a superb introduction to Arendt, this book could directly improve civic life in the United States.”
— Robert Hariman, Northwestern University

“Politics for Everybody is a brave and successful attempt to introduce readers to Arendt’s ideas of politics in the face of the distorted examples in contemporary political thinking and acting. O’Gorman’s assumes—rightly, I think—that people are ready to hear a new case made for politics and the political, terms which here refer to an activity and an attitude, an ethic and an ethos. All those interested in contemporary politics will profit from meditating on O’Gorman’s rethinking of what politics should be about.”
— Richard H. King, University of Nottingham