The Education of Betsey Stockton: An Odyssey of Slavery and Freedom (Hardcover) 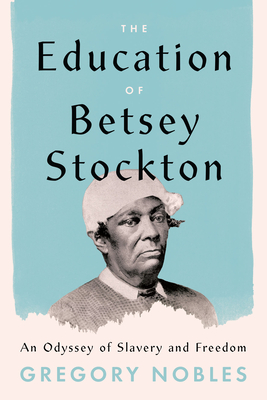 A perceptive and inspiring biography of an extraordinary woman born into slavery who, through grit and determination, became a historic social and educational leader.

The life of Betsey Stockton (ca. 1798–1865) is a remarkable story of a Black woman’s journey from slavery to emancipation, from antebellum New Jersey to the Hawai‘ian Islands, and from her own self-education to a lifetime of teaching others—all told against the backdrop of the early United States’ pervasive racism. It’s a compelling chronicle of a critical time in American history and a testament to the courage and commitment of a woman whose persistence grew into a potent form of resistance.

When Betsey Stockton was a child, she was “given, as a slave” to the household of Rev. Ashbel Green, a prominent pastor and later the president of what is now Princeton University. Although she never went to school, she devoured the books in Green’s library. After being emancipated, she used that education to benefit other people of color, first in Hawai‘i as a missionary, then Philadelphia, and, for the last three decades of her life, Princeton—a college town with a genteel veneer that never fully hid its racial hostility. Betsey Stockton became a revered figure in Princeton’s sizeable Black population, a founder of religious and educational institutions, and a leader engaged in the day-to-day business of building communities.

In this first book-length telling of Betsey Stockton’s story, Gregory Nobles illuminates both a woman and her world, following her around the globe, and showing how a determined individual could challenge her society’s racial obstacles from the ground up. It’s at once a revealing lesson on the struggles of Stockton’s times and a fresh inspiration for our own.

Gregory Nobles is professor emeritus of history at Georgia Institute of Technology and a historian who has written extensively on the era from the American Revolution to the Civil War. He is the author or coauthor of several books, most recently John James Audubon: The Nature of the American Woodsman.

"As was true of his biography of John James Audubon, Gregory Nobles, in his new book, The Education of Betsey Stockton: An Odyssey of Slavery and Freedom, gives readers broad and deep insights into the time period of his subject and those parts of the United States in which she lived and worked...what it means for a reader is that we have a chance to be fully immersed in events and beliefs of our own American past while the author pieces together, like a quilt, the life of a specific historical human being. "
— Books In Northport

“At last, Betsey Stockton receives the full biography she deserves. Working with the scant records of Stockton’s life, and brilliantly situating her experiences amidst broader social and political debates, Nobles reveals Stockton as a woman of bravery and persistence, intellect and faith. Long a figure of local renown, she here claims her place in the broader story of remarkable women who emerged from enslavement to become civic leaders who reshaped Black community life.”
— Martha A. Sandweiss, founding director of The Princeton & Slavery Project

“In The Education of Betsey Stockton, Nobles uncovers a once-hidden thread in the rich and complex historical tapestry of this country. Through his narrative attentiveness, he expands our understanding of the intricately interwoven historical issues of power and race, while simultaneously celebrating Betsey Stockton’s incalculable impact on the communities she blessed with her presence. This book is a necessary addition to the complicated story of Blacks in America.”
— David Latimore, director of the Betsey Stockton Center for Black Church Studies at Princeton Theological Seminary

"Nobles’ biography of Betsey Stockton returns to us an astonishing heroine of early America. Born into slavery in New Jersey, Stockton gains freedom, literacy, and a new life as a Christian missionary and teacher in Hawai’i before her return to eastern North America as a teacher and, in Princeton, a founder of the town's First Presbyterian Church of Color and a pillar of the community.  Nobles’ page-turning narrative greatly expands our understanding of the 'freedom dreams' of African Americans in the pre-Civil War United States."

“Using only scraps of historical evidence, Nobles thoroughly succeeds in tracing the life of an individual African American—Betsey Stockton—and simultaneously illuminating the end of slavery in the North. Nobles is a gifted writer, an excellent historian, and an imaginative researcher, and his well-timed book is a pleasure to read.”
— Shane White, author of Prince of Darkness: The Untold Story of Jeremiah G. Hamilton, Wall Street’s First Black Millionaire

"Betsey Stockton’s odyssey took her from Princeton to the faraway Hawaiian Islands, where she began a missionary school for commoners. After venturing elsewhere in the United States and Canada, she returned to New Jersey where, despite obstacles posed by a racist society, she continued to educate people of color. In Nobles’ skillful telling, the story of Stockton’s life (ca. 1798 through the Civil War) shows how history is made at the local level by individuals who dedicate themselves to a cause. Stockton’s accomplishments as churchwoman and educator never earned her national fame, but her work was as crucial as that of Frederick Douglass or Harriet Tubman to the struggle for freedom and civil rights."
— Marie Jenkins Schwartz, author of Ties That Bound: Founding First Ladies and Slaves