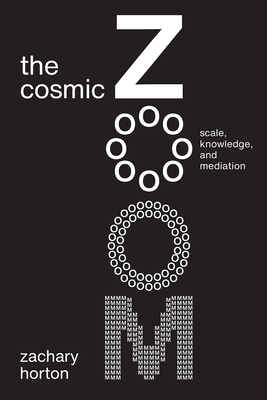 In The Powers of Ten by Charles and Ray Eames, a view of two people enjoying a picnic zooms up and away to show their surroundings, moving progressively farther into space, then zooms back in for a close-up of the hand of the picnicker, travelling deep into the microscopic realm. This is one of the most iconic examples of the “cosmic zoom,” a trope that has influenced countless media forms over the past seventy years.

Horton uses the cosmic zoom as a starting point to develop a cross-disciplinary theory of scale as mediated difference. He considers the origins of our notions of scale, how scalar mediation functions differently in analog and digital modes, and how cosmic zoom media has influenced scientific and popular views of the world. Analyzing literature, film, digital media, and database history, Horton establishes a much-needed framework for thinking about scale across multiple domains and disciplines.

Zachary Horton is assistant professor of English and media studies at the University of Pittsburgh. He is a game designer, filmmaker, camera designer, and the founding director of the Vibrant Media Lab.

"The upshot of this granular media history is an urgent theoretical insight into how humans have handled differences in scale and how they might do so differently, urgent because the mishandling of the question threatens to impose an early end to our existence and that of many other species. The books, films, and digital media that Horton studies are a powerful scaffolding for this argument, but the real material he wants us to consider are the theoretical armatures themselves, the ones that our various media and our accommodations in the world are built on."
— The Brooklyn Rail

“Scales are musical things to practice, metric things to weigh with, ladders to ascend the heavens, and climaxes of our stories. Horton shows that scale is a matter of shape as much as size, of quality as much as quantity in this cosmic journey through postwar cultural forms that comment on the human, and more-than-human, condition. There are seismic implications here, for not only media studies, but any discipline, or reader, in need of a philosophy of scale.”
— John Durham Peters, Yale University

“In this illuminating and well-researched book, Horton takes us on a journey through different scales of the universe. Rather than entice us with the prospect of a godlike glide across a cosmic zipline, he exhorts us to take responsibility for scalar relations. Through its variously enfolded media ecologies, The Cosmic Zoom thus ends up performing an ethics of mediation for our troubled world.”
— Joanna Zylinska, author of Nonhuman Photography

“Down the rabbit hole, and up again, across mediated universes and powers of ten, resolution to resolution, The Cosmic Zoom is an outstanding scale-hopping piece of scholarship. Horton brings to focus both why scales are crucial to how we understand disciplinary knowledge and how scalar difference is a core part of the transformational powers that define contemporary aesthetic and epistemic cultures.”
— Jussi Parikka, author of Insect Media and A Geology of Media