The Hunter: A Parker Novel (Paperback) 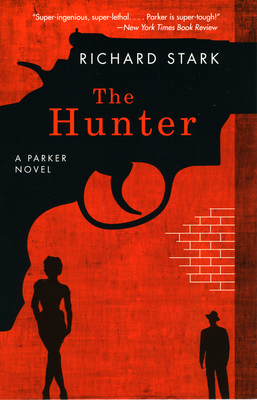 First in a long series of novels by Richard Stark, The Hunter introduced readers everywhere to one of the most proficient and prolific criminal characters in all of fiction, Parker. With its sparse prose and an ever-evolving plot, you’ll happily turn page after page as you get deeper into Parker’s mission against the man who betrayed him, mob middlemen, and any other heavies who get in his way.

She shot him just above the belt and left him for dead. Then they torched the house, with Parker in it, and took the money he had helped them steal. It all went down just the way they'd planned, except for one thing: Parker didn't die.

In The Hunter, the first volume in the Parker series, our ruthless antihero roars into New York City, seeking revenge on the woman who betrayed him and on the man who took his money, stealing and scamming his way to redemption. The volume that kickstarted Parker's forty-plus-year career of larceny—and inspired the 1967 motion picture Point Blank, starring Lee Marvin—The Hunter is back, ready to thrill a new generation of noir fans.

Richard Stark was one of the many pseudonyms of Donald E. Westlake (1933-2008), a prolific author of noir crime fiction. In 1993 the Mystery Writers of America bestowed the society’s highest honor on Westlake, naming him a Grand Master.

“Parker represents the antihero with dubious morals. Stark’s clever plot structure, moving back and forth in time, is totally engrossing.”--Library Journal
— Library Journal

“Writing a couple of years ago . . . John Banville reckoned the Parker novels to be 'among the most poised and polished fictions of their time and, in fact, any time.' That's high praise from an impeccable source, and Banville is right to single out the technical excellence of these books. The Parkers read with the speed of pulp while unfolding with an almost Nabokovian wit and flair. . . . Original editions of these books, and even later reprints, change hands for scores or hundreds of dollars on the Net, and it’s excellent to have them readily available again—not so much masterpieces of the genre, just masterpieces, period. . . . . The Hunter glitters with seemingly effortless intricacy, being aimed at one episode—a stunner, the kind of moment in fiction that really does have you leaping from your chair and exclaiming in surprise and glee.”

“Fiercely distracting . . . . Westlake is an expert plotter; and while Parker is a blunt instrument of a human being depicted in rudimentary short grunts of sentences, his take on other characters reveals a writer of great humor and human understanding.”
— John Hodgman

“Parker is refreshingly amoral, a thief who always gets away with the swag.”

“Whatever Stark writes, I read. He’s a stylist, a pro, and I thoroughly enjoy his attitude.”
— Elmore Leonard

“Richard Stark’s Parker novels . . . are among the most poised and polished fictions of their time and, in fact, of any time.”
— John Banville

“Parker is a true treasure. . . . The master thief is back, along with Richard Stark.”
— Marilyn Stasio

“Westlake knows precisely how to grab a reader, draw him or her into the story, and then slowly tighten his grip until escape is impossible.”
— Washington Post Book World

“Donald Westlake’s Parker novels are among the small number of books I read over and over. Forget all that crap you’ve been telling yourself about War and Peace and Proust—these are the books you’ll want on that desert island.”
— Lawrence Block

“If you’re looking for crime novels with a lot of punch, try the very, very tough novels featuring Parker. . . . The Hunter, The Outfit, The Mourner, and The Man with the Getaway Face are all beautifully paced, tautly composed, and originally published in the early 1960s."

“Richard Stark writes a harsh and frightening story of criminal warfare and vengeance with economy, understatement and a deadly amoral objectivity—a remarkable addition to the list of the shockers that the French call romans noirs.”
— Anthony Boucher

"Parker is a brilliant invention. . . . What chiefly distinguishes Westlake, under whatever name, is his passion for process and mechanics. . . . Parker appears to have eliminated everything from his program but machine logic, but this is merely protective coloration. He is a romantic vestige, a free-market anarchist whose independent status is becoming a thing of the past."
— Luc Sante

"I wouldn't care to speculate about what it is in Westlake's psyche that makes him so good at writing about Parker, much less what it is that makes me like the Parker novels so much. Suffice it to say that Stark/Westlake is the cleanest of all noir novelists, a styleless stylist who gets to the point with stupendous economy, hustling you down the path of plot so briskly that you have to read his books a second time to appreciate the elegance and sober wit with which they are written."
— Terry Teachout

"If you're a fan of noir novels and haven't yet read Richard Stark, you may want to give these books a try. Who knows? Parker may just be the son of a bitch you've been searching for."
— John McNally

"The University of Chicago Press has recently undertaken a campaign to get Parker back in print in affordable and handsome editions, and I dove in. And now I get it."
— Josef Braun

"Whether early or late, the Parker novels are all superlative literary entertainments."
— Terry Teachout

“The UC Press mission, to reprint the 1960s Parker novels of Richard Stark (the late Donald Westlake), is wholly admirable. The books have been out of print for decades, and the fast-paced, hard-boiled thrillers featuring the thief Parker are brilliant.”