The Ashtray: (Or the Man Who Denied Reality) (Hardcover) 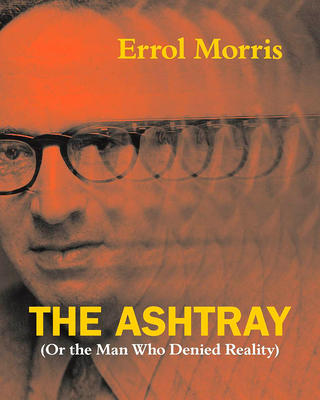 By Errol Morris
$30.00
Possibly out of print. Email or call to check availability and price.

Filmmaker Errol Morris offers his perspective on the world and his powerful belief in the necessity of truth.

In 1972, philosopher of science Thomas Kuhn threw an ashtray at Errol Morris. This book is the result.

At the time, Morris was a graduate student. Now we know him as one of the most celebrated and restlessly probing filmmakers of our time, the creator of such classics of documentary investigation as The Thin Blue Line and The Fog of War. Kuhn, meanwhile, was—and, posthumously, remains—a star in his field, the author of The Structure of Scientific Revolutions, a landmark book that has sold well over a million copies and introduced the concept of “paradigm shifts” to the larger culture. And Morris thought the idea was bunk.

The Ashtray tells why—and in doing so, it makes a powerful case for Morris’s way of viewing the world, and the centrality to that view of a fundamental conception of the necessity of truth. “For me,” Morris writes, “truth is about the relationship between language and the world: a correspondence idea of truth.” He has no patience for philosophical systems that aim for internal coherence and disdain the world itself. Morris is after bigger game: he wants to establish as clearly as possible what we know and can say about the world, reality, history, our actions and interactions. It’s the fundamental desire that animates his filmmaking, whether he’s probing Robert McNamara about Vietnam or the oddball owner of a pet cemetery. Truth may be slippery, but that doesn’t mean we have to grease its path of escape through philosophical evasions. Rather, Morris argues powerfully, it is our duty to do everything we can to establish and support it.

In a time when truth feels ever more embattled, under siege from political lies and virtual lives alike, The Ashtray is a bracing reminder of its value, delivered by a figure who has, over decades, uniquely earned our trust through his commitment to truth. No Morris fan should miss it.

Errol Morris is a director of films, primarily documentaries, including The Thin Blue Line; Gates of Heaven; Fast, Cheap, and Out of Control; and The Fog of War, which won the Academy Award for Best Documentary Feature for 2003.

“A scrappy continuation of Morris's disagreement with Kuhn and an explanation of why he thinks Kuhn’s ideas, which bear a certain resemblance to Berkeley’s, are so pernicious.  . . . The Ashtray strikes me as an unlikely source for reaching a better understanding of Kuhn.; Morris dislikes him too much and can’t be trusted not to stack the deck against him. He ignores, for example, the excellent arguments against Whiggishness as a form of propaganda used to justify the historical dominance of Westerners over the rest of the world. But the book is a marvelous tool for the better understanding of Errol Morris, who is both a great artist and a fascinating individual in his own right.”

"Oscar-winning filmmaker Morris was once a graduate student under philosopher Thomas Kuhn, author of The Structure of Scientific Revolutions, and this intimate analysis of flaws in that 1962 treatise is driven by Morris's smart, conversational tone. . . . Throughout the heady discussion, Kuhn's cantankerous personality is revealed: he once threw an ashtray at Morris, who is responding--albeit 45 years later--by lobbing this combative tome into the academic and practical world."

“The documentarian Errol Morris gives us The Ashtray, a semi-autobiographical tale of the supremely influential The Structure of Scientific Revolutions by Thomas S. Kuhn. A spellbinding intellectual adventure into the limits, fragility, and infirmity of human reason. Morris’s tale is picaresque. Anecdotes, cameos, interviews, historical digressions, sly side notes, and striking illustrations hang off a central spine that recounts critical episodes in the history of analytic philosophy.”

“What is it about philosophers? A more fissiparous bunch it would be hard to find: if they aren’t threatening each other with pokers, they are flinging ashtrays at each other’s heads. . . . The Ashtray is passionate, polemical and defiantly written in chatty, accessible language with copious amusing footnotes. Frequently scabrous, Morris acknowledges that it could be seen as a vendetta, and freely admits that it is, as he views Kuhn’s idea of the social construction of knowledge as pernicious and disturbing. As befits a man whose life has been dedicated to documentary films, Morris sets great store by the existence of an objective truth, and this book is his passionate defence of that truth. . . . I found this all rather enjoyable. If you want an opinionated, impolite page-turner picking a fight with half of the modern philosophy of science, this is definitely the book for you.”

"Many readers will know Errol Morris for his superb films that have won an Academy Award and other high honors. He has given us a book of the same quality and importance. It is a sustained argument in defense of Truth and Reality. At the same time, it is the story of a life in passionate pursuit of these vital ideas, not as distant abstractions but as things that actually exist in the world and demand our respect. It is about time! In an era of false news in our media, pseudo facts in politics, and political correctness in academe, no cause is more urgent than the cause of Truth and Reality."

"A compelling send-up of contemporary relativism about truth and epistemology by the distinguished film-maker and writer Errol Morris. He bases it on his own personal interactions with Thomas Kuhn, one of its most influential practitioners. But there is a little bit of everything in the book. Interviews with philosophers and scientists are intertwined with stories from many of my own favorite authors (Lewis Carroll, Russell, Borges), and discussions of notions such as reference, natural kind, paradigm, and incommensurability. Throughout we find, as we have come to expect from him, Morris's commitment to find out the truth. This time about truth itself."
— Saul Kripke

"A wonderful read, combining memoir, epistemological reflection, the ethnography of academic philosophy -and confession of faith. The Ashtray will provoke and stimulate any serious reader, but it will provide particular insights for anyone familiar with Morris's important films."

"Errol Morris is a remarkable documentary film maker. He pursues his craft in the conviction that there is truth to be found and that creative and determined efforts will uncover it. In this extraordinary book, Morris explores his animating philosophical commitments about truth, reality, and knowledge. He presents his outlook in sharp opposition to ideas about relativism and incommensurability that he associates with Thomas Kuhn’s profoundly influential The Structure of Scientific Revolutions. Morris's book is entertaining and engaging, but above all else it offers us a compelling exploration of the value of truth."
— Joshua Cohen, Apple University

"This book is brilliant, thought-provoking, sometimes infuriating, and nearly always convincing. Everyone interested in the fate of truth and knowledge in these postmodern, alternative fact times should read it."
— David Wootton, author of Power, Pleasure, and Profit

"Is truth real or is it a matter of opinion? That is the question Errol Morris ponders in this fascinating book. His argument for the reality of truth is compelling, informative, and lively. And there's another powerful lesson in it that goes far beyond the seemingly abstract philosophical issues: We escape the bubble of relativism precisely when we reach out to other human beings, when we care about something more than the 'little me,' when we offer the world our love--as Morris has done with his inspiring films, and now with this book."