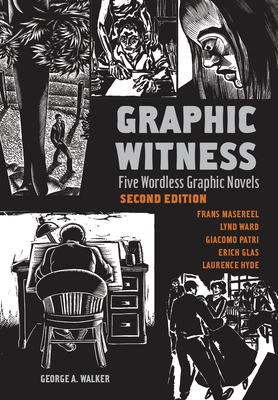 Graphic Witness features rare wordless novels by five great twentieth century woodcut artists from Europe and North America. The stories they tell reflect the political and social issues of their times as well as the broader issues that are still relevant today.

Frans Masereel (1899-1972) was born in Belgium and is considered the father of the wordless graphic novel. Graphic Witness includes the first reprint of his classic work The Passion of a Man since its 1918 publication in Munich. American Lynd Ward (1905-85), author of the provocative Wild Pilgrimage, is considered among the most important of wordless novelists. Giacomo Patri (1898-1978) was born in Italy and lived in the United States. His White Collar featured an introduction by Rockwell Kent and was used a promotional piece by the labor movement. Erich Glas's (1897-1973) haunting wordless novel Leilot, created in 1942, foreshadows the Holocaust, which was not widely known about at the time. Southern Cross by Canadian Laurence Hyde (1914-87) was controversial for its criticism of U.S. H-bomb testing in the South Pacific.

Author George A. Walker draws on his expertise as a woodcut artist to provide insight into the tools and techniques used to create these works of art. As well, he examines the importance of the role of artists as witnesses and critics of their times, and the influence of the genre on the emergence of comics and the modern graphic novel.

This newly expanded edition of Graphic Witness, which features an afterword by cartoonist Seth, will appeal to readers interested in social issues, printmaking, art history and contemporary culture.

George A. Walker is an award-winning wood engraver, book artist, author and illustrator. His courses in the book arts and printmaking at the Ontario College of Art and Design University in Toronto, where he is an Associate Professor. His courses have been running continuously since 1985. For over twenty years he has exhibited his wood engravings and limited-edition books internationally. Among many artist book projects, George has illustrated two hand-printed editions written by Neil Gaiman and is the author of Leonard Cohen: A Woodcut Biography and The Woodcut Artist's Handbook, also published by Firefly Books.