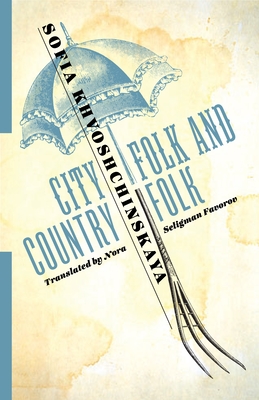 An unsung gem of nineteenth-century Russian literature, City Folk and Country Folk is a seemingly gentle yet devastating satire of Russia's aristocratic and pseudo-intellectual elites in the 1860s. Translated into English for the first time, the novel weaves an engaging tale of manipulation, infatuation, and female assertiveness that takes place one year after the liberation of the empire's serfs. Upending Russian literary clich's of female passivity and rural gentry benightedness, Sofia Khvoshchinskaya centers her story on a common-sense, hardworking noblewoman and her self-assured daughter living on their small rural estate. The antithesis of the thoughtful, intellectual, and self-denying young heroines created by Khvoshchinskaya's male peers, especially Ivan Turgenev, seventeen-year-old Olenka ultimately helps her mother overcome a sense of duty to her "betters" and leads the two to triumph over the urbanites' financial, amorous, and matrimonial machinations. Sofia Khvoshchinskaya and her writer sisters closely mirror Britain's Bront's, yet Khvoshchinskaya's work contains more of Jane Austen's wit and social repartee, as well as an intellectual engagement reminiscent of Elizabeth Gaskell's condition-of-England novels. Written by a woman under a male pseudonym, this brilliant and entertaining exploration of gender dynamics on a post-emancipation Russian estate offers a fresh and necessary point of comparison with the better-known classics of nineteenth-century world literature.

Sofia Khvoshchinskaya (1824-1865), a writer, translator, and painter, published fiction and social commentary in Russia's most influential journals. She and her sister Nadezhda wrote to support their family, struggling members of the nobility, alternating long stretches of toil in their native Ryazan Province with visits to Russia's capitals, where they interacted with some of the country's leading intellectuals. Nora Seligman Favorov is a translator of Russian literature, poetry, and history.