Glory in Their Spirit: How Four Black Women Took On the Army during World War II (Women, Gender, and Sexuality in American History) (Hardcover) 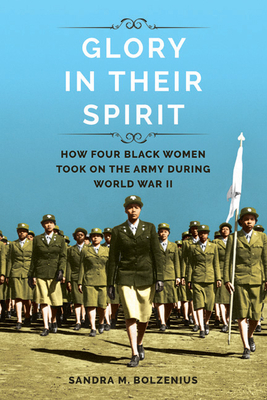 By Sandra M. Bolzenius
Email or call for price

Before Rosa Parks and the March on Washington, four African American women risked their careers and freedom to defy the United States Army over segregation. Women Army Corps (WAC) privates Mary Green, Anna Morrison, Johnnie Murphy, and Alice Young enlisted to serve their country, improve their lives, and claim the privileges of citizenship long denied them. Promised a chance at training and skilled positions, they saw white WACs assigned to those better jobs and found themselves relegated to work as orderlies. In 1945, their strike alongside fifty other WACs captured the nation's attention and ignited passionate debates on racism, women in the military, and patriotism. Glory in Their Spirit presents the powerful story of their persistence and the public uproar that ensued. Newspapers chose sides. Civil rights activists coalesced to wield a new power. The military, meanwhile, found itself increasingly unable to justify its policies. In the end, Green, Morrison, Murphy, and Young chose court-martial over a return to menial duties. But their courage pushed the segregated military to the breaking point ”and helped steer one of American's most powerful institutions onto a new road toward progress and justice.

Sandra M. Bolzenius is a former instructor at The Ohio State University and served as a transportation specialist in the United States Army.

"Glory in Their Spirit is an absolute pleasure to read and does justice to the bravery of four all but forgotten women who took on the Army in WWII." --Journal of American Ethnic History

"Interesting, well-written, and accessible. Sandra Bolzenius unearths a treasure trove of rich, relevant primary source archival materials that highlights the lesser known experiences of black women in addition to speaking to the uniqueness of the military as a venue for the redress, and suppression, of rights."--Elizabeth Escobedo, author of From Coveralls to Zoot Suits: The Lives of Mexican American Women on the World War II Home Front


"This well-written account of little-known yet essential stories of valor and protest will fascinate readers interested in WWII, women’s history, and heretofore untold stories of civil-rights trailblazers. Recommend Glory in Their Spirit to fans of Hidden Figures."--Booklist

"Glory in Their Spirit is a compelling, deeply researched book." --Black Perspectives

"An enlightening read, Glory in Their Spirit examines a little-known history of the war." --World War II Magazine

"Bolzenius is to be congratulated for her unrelenting attention to detail while also addressing the historical context of why four black women felt duty-bound to take on the army during World War II. Glory in Their Spirit encompasses an impressive array of legal history, black history, and social history." --The Journal of American History

"Meticulously researched and well-written. . . . This title will be a valuable resource for those interested in WW II government, African American and minority history, and women's studies. Recommended." --Choice

"This work contributes new voices to the long civil rights movement narrative, and Black servicewomen are added to the ranks of activists who strove to eliminate discrimination in the United States. . . . Bolzenius's monograph provides significant insight." --H-War

"Glory in their Spirit: How Four Black Women Took on the Army During World War II tells a significant story. It brings to light and life a forgotten episode in Massachusetts history, reminding us that the 'Greatest Generation' was by no means above reproach, perhaps condemnation, and by showing the pervasive prejudice of the mid-twentieth-century United States, illustrates how far we have come toward providing equal access." --Historical Journal of Massachusetts

"Black men and Black women integrated the military as officers and as enlisted in different ways. This is the important and untold story of Black enlisted women and the unexpected way their integration occurred."--Judith Hicks Stiehm, editor of It's Our Military, Too: Women and the U.S. Military