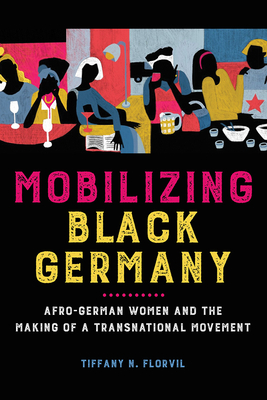 By Tiffany N. Florvil
Email or call for price

In the 1980s and 1990s, Black German women began to play significant roles in challenging the discrimination in their own nation and abroad. Their grassroots organizing, writings, and political and cultural activities nurtured innovative traditions, ideas, and practices. These strategies facilitated new, often radical bonds between people from disparate backgrounds across the Black Diaspora.

Tiffany N. Florvil examines the role of queer and straight women in shaping the contours of the modern Black German movement as part of the Black internationalist opposition to racial and gender oppression. Florvil shows the multifaceted contributions of women to movement making, including Audre Lorde’s role in influencing their activism; the activists who inspired Afro-German women to curate their own identities and histories; and the evolution of the activist groups Initiative of Black Germans and Afro-German Women. These practices and strategies became a rallying point for isolated and marginalized women (and men) and shaped the roots of contemporary Black German activism.

Richly researched and multidimensional in scope, Mobilizing Black Germany offers a rare in-depth look at the emergence of the modern Black German movement and Black feminists’ politics, intellectualism, and internationalism.

Tiffany N. Florvil is an associate professor in the Department of History at the University of New Mexico.

​"Offers tantalizing glimpses of what solidarities are possible today, what has caused them to break down, and how we can define freedom in a way that gives access to the most people." --Public Books

​"At long last, the book we have been waiting for--not just for scholars of Afrodeutsch/Black German Studies, or even Afropean and Black European Studies: Florvil's magisterial Mobilizing Black Germany is a must-read for all scholars of the Black and African diasporas who are interested in the history of Black activism. Mobilizing Black Germany takes you to the very beginning of the Afrodeutsch movement, some years before Audre Lorde's arrival, and puts you right inside. Florvil's deep research crafts an unforgettable history rich with famous figures who stride the global stage and local heroes whose sacrifices and achievements were no less monumental."--Michelle M. Wright, author of Physics of Blackness: Beyond the Middle Passage Epistemology

​"Tiffany N. Florvil does more than offer brilliant and original accounts of black feminist and queer activists and organizations in Germany from the 1980s through the 2000s. Her beautifully written and thoroughly engaging book provides a powerful and compelling analytical framework for expanding the geographic parameters of the African Diaspora and for centering gender, sexualities, and women to forging black internationalism."--Erik S. McDuffie, author of Sojourning for Freedom: Black Women, American Communism, and the Making of Black Left Feminism

​"Mobilizing Black Germany is thus a powerful work not only because it exposes how German society is shot through with racism, but also because it recognizes German culture as a site of Black literary and artistic expression." --Los Angeles Review of Books