Marketing the Moon: The Selling of the Apollo Lunar Program (Hardcover) 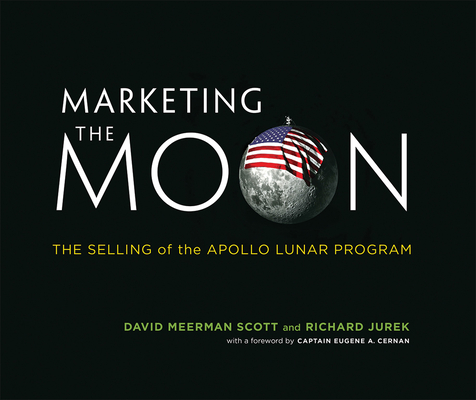 By David Meerman Scott, Richard Jurek, Eugene A. Cernan (Foreword by)
$29.95
Possibly out of print. Email or call to check availability and price.

In July 1969, ninety-four percent of American televisions were tuned to coverage of Apollo 11's mission to the moon. How did space exploration, once the purview of rocket scientists, reach a larger audience than My Three Sons? Why did a government program whose standard operating procedure had been secrecy turn its greatest achievement into a communal experience? In Marketing the Moon, David Meerman Scott and Richard Jurek tell the story of one of the most successful marketing and public relations campaigns in history: the selling of the Apollo program.

Primed by science fiction, magazine articles, and appearances by Wernher von Braun on the “Tomorrowland” segments of the Disneyland prime time television show, Americans were a receptive audience for NASA's pioneering “brand journalism.” Scott and Jurek describe sophisticated efforts by NASA and its many contractors to market the facts about space travel—through press releases, bylined articles, lavishly detailed background materials, and fully produced radio and television features—rather than push an agenda. American astronauts, who signed exclusive agreements with Life magazine, became the heroic and patriotic faces of the program. And there was some judicious product placement: Hasselblad was the “first camera on the moon”; Sony cassette recorders and supplies of Tang were on board the capsule; and astronauts were equipped with the Exer-Genie personal exerciser. Everyone wanted a place on the bandwagon.

Generously illustrated with vintage photographs, artwork, and advertisements, many never published before, Marketing the Moon shows that when Neil Armstrong took that giant leap for mankind, it was a triumph not just for American engineering and rocketry but for American marketing and public relations.

David Meerman Scott is a marketing strategist and the author of three bestselling books, The New Rules of Marketing and PR, Real-Time Marketing, and Marketing Lessons from the Grateful Dead. He lives in Lexington, Massachuetts.

Richard Jurek has worked as a marketing and public relations executive for more than twenty years. He lives in Chicago.

Gene Cernan is a retired United States Navy officer and a former NASA astronaut. He has been into space three times: as pilot of Gemini 9, as lunar module pilot of Apollo 10, and as commander of Apollo 17, the final Apollo lunar landing. He was the last man to set foot on the moon.

A well-written look at how NASA, industry, and the media covered the Apollo missions.....Marketing the Moon provides a fascinating look at the marketing of humanity's first missions to the Moon, as well as a reminder that space exploration, including first-of-their-kind missions to other worlds in our solar system, do not sell themselves.—Jeff Foust, The Space Review—

The book tells an entertaining and engaging story, but there's a lot to learn from here, as well...And it's a beautiful book. Lavishly illustrated, it's a book for the coffee table, the office desk, the lobby. Full-page illustrations; covers and excerpts of glossy magazines from the era, as well as full-page 'asides' on related topics: Disney's Tomorrowland; the '50s sci-fi television series Space Patrol; Soviet Russian efforts to inspire with elaborate futuristic space films of their own. And much more...The text boxes and asides are just as fascinating and informative as the main narrative itself. And it's impeccably researched: from how reporters with low-budget media improvised launch coverage, to how contractors ingeniously pioneered new methods of colour photography. The authors leave no stone unturned - not even moon rocks, whose complicated fate in international diplomacy they chronicle as well. Those with an interest in marketing and complex project management will find the book particularly interesting, but it's accessible for the general public and will enthrall any space enthusiast.

The book is a highly illustrated tour-de-force of the particular way government and industry grabbed the attention of the media and, at first without planning it, wooed the public and seduced print and electronic news channels to get behind the biggest message of the day.

Marketing the Moon records elegantly and precisely such details, but it tells an important and generally understated sociological story of how the Apollo program changed the way we see the world in a different sense too: it introduced new expectations of 'live television', of unedited audio transcripts, or direct access to experts and officials. All this openness was remarkable in the context of a space program launched in the shadow of the fiasco of the Bay of Pigs invasion and driven by the military's need to 'beat the Russians'.

U.S. government goes 'Mad Men' on Apollo, gets it right.

Scott and Jurek devote a whole chapter of 'Marketing the Moon'—which, it should be noted, overflows with beautiful photographs, drawings, and illustrations—to the broadcast and reporting of the Apollo 11 moon landing. The main thing, they show, was that it was live—and that its liveness embodied, in itself, the bravery and risk of the mission. Gene Cernan, the last astronaut to walk on the moon, describes it this way: 'We didn't say, 'We'll tell you about it in two weeks.' We took you with us. The power of television is unbelievable. That's what television does. What you are seeing is happening at this instant. … [T]he thing that brought so much prestige to this country is that every launch, every landing on the Moon, and every walk on the Moon was given freely to the world in real time. We didn't doctor up the movie, didn't edit anything out; what was said was said.' CBS covered the Apollo 11 landing for thirty-two continuous hours; it set up special screens in Central Park so that people could watch in a crowd. Ninety-four per cent of TV-owning American households tuned in. Without television, the moon landing would have been a merely impressive achievement—an expensive stunt, to the cynical. Instead, seen live, unedited, and everywhere, it became a genuine experience of global intimacy.

Something profound had changed since the early days of the heroic, untouchable space heroes. In Marketing the Moon, David Meerman Scott and Richard Jurek do a masterful job defining that something and placing it within a much broader exploration of how the U.S. space program acquired such mythic status in the first place—before it abruptly, sadly crumbled away. Along the way, the authors achieve something I doubted was possible: They provide fresh and important insights into the Apollo program, nearly half a century after the fact.

If you're interested in the public affairs side of the Apollo era, I'd highly recommend Marketing the Moon. It dives into one of the least often discussed but vitally important aspects of bringing a lunar mission from concept to reality.

I'd like to sing the praises of large-format, image-heavy historical books that are creative in approach and gorgeous to peruse.... As a gift for anyone who's interested in space or the history of advertising, Marketing the Moon: The Selling of the Apollo Lunar Program by David Meerman Scott and Richard Jurek will fascinate. The book chronicles the extensive effort made to get the Apollo program favorable press coverage, and to explain the science behind the effort to the public. (I ran images of two tracking wheels, distributed to press to provide technical context for the missions, on this blog in May.) Its pages include many reproductions of materials from press kits, television broadcasts, and advertisements.

Marketing the Moon: The Selling of the Apollo Lunar Program is a comprehensive look at the successes and the challenges of launching a massive marketing program. Marketing and communication managers will find countless insights into the pitfalls as well as the rewards of creating and nurturing their own initiatives…