An Underground Guide to Sewers: or: Down, Through and Out in Paris, London, New York, &c. (Hardcover) 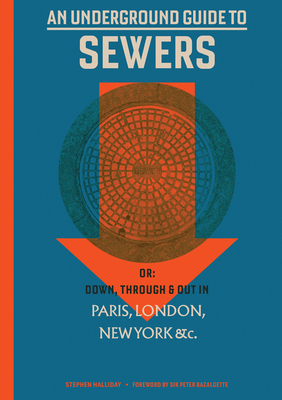 By Stephen Halliday, Peter Bazalgette (Foreword by)
$34.95
Possibly out of print. Email or call to check availability and price.

A global guide to sewers that celebrates the magnificently designed and engineered structures beneath the world's great cities.

The sewer, in all its murkiness, filthiness, and subterranean seclusion, has been an evocative (and redolent) literary device, appearing in works by writers ranging from Charles Dickens to Graham Greene. This entertaining and erudite book provides the story behind, or beneath, these stories, offering a global guide to sewers that celebrates the magnificently designed and engineered structures that lie underneath the world's great cities. Historian Stephen Halliday leads readers on an expedition through the execrable evolution of waste management—the open sewers, the cesspools, the nightsoil men, the scourge of waterborne diseases, the networks of underground piping, the activated sludge, the fetid fatbergs, and the sublime super sewers.

Halliday begins with sanitation in the ancient cities of Mesopotamia, Greece, and Imperial Rome, and continues with medieval waterways (also known as “sewage in the street”); the civil engineers and urban planners of the industrial age, as seen in Liverpool, Boston, Paris, London, and Hamburg; and, finally, the biochemical transformations of the modern city. The narrative is illustrated generously with photographs, both old and new, and by archival plans, blueprints, and color maps tracing the development of complex sewage systems in twenty cities. The photographs document construction feats, various heroics and disasters, and ingenious innovations; new photography from an urban exploration collective offers edgy takes on subterranean networks in cities including Montreal, Paris, London, Berlin, and Prague.

Stephen Halliday is the author of Water: A Turbulent History, Amazing and Extraordinary London Underground Facts, and The Great Stink: Sir Joseph Bazalgette and the Cleansing of the Victorian Metropolis.

Sir Peter Bazalgette is the greatgreat- grandson of Victorian civil engineer Sir Joseph Bazalgette and the former head of both ITV and the Arts Council of England.

If you think an exploration of excrement disposal doesn't sound like fun, think again. This highly entertaining, dare we say absorbing, book is “a sort of 'Around the World in Eighty Toilets,'” as Sir Peter Bazalgette — whose great-great-grandfather designed the London sewer system — proclaims in his foreword.—Tina Jordan, New York Times Book Review—