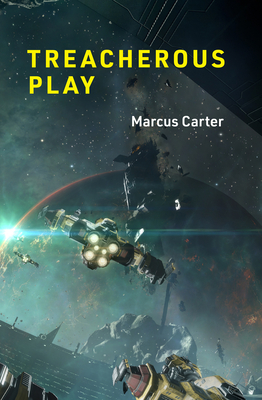 By Marcus Carter
Email or call for price

The ethics and experience of “treacherous play”: an exploration of three games that allow deception and betrayal—EVE Online, DayZ, and Survivor.

Deception and betrayal in gameplay are generally considered off-limits, designed out of most multiplayer games. There are a few games, however, in which deception and betrayal are allowed, and even encouraged. In Treacherous Play, Marcus Carter explores the ethics and experience of playing such games, offering detailed explorations of three games in which this kind of “dark play” is both lawful and advantageous: EVE Online, DayZ, and the television series Survivor. Examining aspects of games that are often hidden, ignored, or designed away, Carter shows the appeal of playing treacherously.

Carter looks at EVE Online’s notorious scammers and spies, drawing on his own extensive studies of them, and describes how treacherous play makes EVE successful. Making a distinction between treacherous play and griefing or trolling, he examines the experiences of DayZ players to show how negative experiences can be positive in games, and a core part of their appeal. And he explains how in Survivor’s tribal council votes, a player’s acts of betrayal can exact a cost. Then, considering these games in terms of their design, he discusses how to design for treacherous play.

Carter’s account challenges the common assumptions that treacherous play is unethical, antisocial, and engaged in by bad people. He doesn’t claim that more games should feature treachery, but that examining this kind of play sheds new light on what play can be.

Marcus Carter is Senior Lecturer in Digital Cultures in the Department of Media and Communications at the University of Sydney.