Turing (A Novel about Computation) (Paperback) 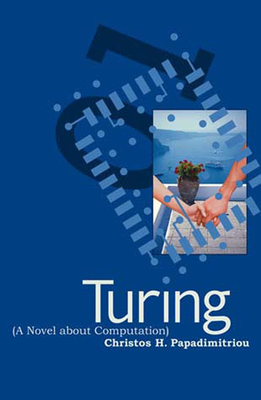 By Christos H. Papadimitriou
$19.95
Possibly out of print. Email or call to check availability and price.

The world of computation according to Turing, an interactive tutoring program, as told to star-crossed lovers: a novel.

Our hero is Turing, an interactive tutoring program and namesake (or virtual emanation?) of Alan Turing, World War II code breaker and father of computer science. In this unusual novel, Turing's idiosyncratic version of intellectual history from a computational point of view unfolds in tandem with the story of a love affair involving Ethel, a successful computer executive, Alexandros, a melancholy archaeologist, and Ian, a charismatic hacker. After Ethel (who shares her first name with Alan Turing's mother) abandons Alexandros following a sundrenched idyll on Corfu, Turing appears on Alexandros's computer screen to unfurl a tutorial on the history of ideas. He begins with the philosopher-mathematicians of ancient Greece—"discourse, dialogue, argument, proof... can only thrive in an egalitarian society"—and the Arab scholar in ninth-century Baghdad who invented algorithms; he moves on to many other topics, including cryptography and artificial intelligence, even economics and developmental biology. (These lessons are later critiqued amusingly and developed further in postings by a fictional newsgroup in the book's afterword.) As Turing's lectures progress, the lives of Alexandros, Ethel, and Ian converge in dramatic fashion, and the story takes us from Corfu to Hong Kong, from Athens to San Francisco—and of course to the Internet, the disruptive technological and social force that emerges as the main locale and protagonist of the novel.

Alternately pedagogical and romantic, Turing (A Novel about Computation) should appeal both to students and professionals who want a clear and entertaining account of the development of computation and to the general reader who enjoys novels of ideas.

Christos H. Papadimitriou is C. Lester Hogan Professor of Computer Science at the University of California, Berkeley and a member of the National Academy of Engineering and the American Academy of Arts and Sciences. He is the author of many books on computational theory.

What's most delightful about Turing is the charmed glow that Papadimitriou's prose sheds all around.